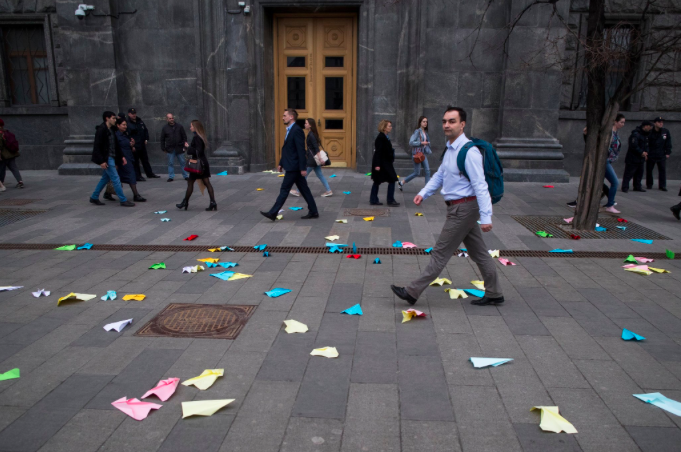 Despite the Kremlin’s measures to ban messaging app Telegram, including blocking 18 million IP addresses, the service has actually shown growth over the past 48 hours. Pussy Riot member Maria Alyokhina has been given 100 hours of community service as a punishment for throwing paper planes outside the FSB headquarters in Moscow, a gesture made in support of Telegram. Without giving a reason, Iran has followed suit in blocking the service. A historian of the Russian internet commented that the attack on Telegram, which hit a variety of other sites as collateral damage, means the Kremlin can now do whatever it wants. “After they have faced this much heat, they can go after Facebook and Google.” Roskomnadzor itself said it may seek to block Facebook next if it is found to be breaking laws about personal data.

President Vladimir Putin apparently wants his close officials to tone down their anti-American rhetoric to support a possible improvement of diplomatic ties and avoid escalation. The Trump administration says it has no plans to impose any further sanctions in the near future. Existing sanctions are hitting the industry hard, as workers at Rusal wonder whether their paychecks are in jeopardy. The state may be forced to take control over more of the economy to cope with the sanctions, says the New York Times. Head Duma speaker Valentina Matviyenko promised that Russia’s retaliatory sanctions will be “precise, painful, and without question sensitive for exactly those countries that imposed them”. Reuters considers some of the US companies that could be at risk.

The Kremlin’s international news channel, RT, is facing 7 new investigations from UK regulator Ofcom over material it has produced since the poisoning of former spy Sergei Skripal, and may have its UK license revoked. Russia’s embassy in London said the investigations amount to “targeted scrutiny” of RT that will affect press freedom. State-run television within Russia is still the major and most trusted source of news for most Russians (85%). Dozhd TV reported yesterday that the head of the youth group attached to the United Russia party is calling on its members to be prepared to join counterprotests at short notice in large cities in a bid “to destroy the myth that the opposition controls the street”. The head of OPCW, the global chemical weapons watchdog, rejected Russia’s claims that traces of a second nerve agent were discovered in Salisbury where Skripal and his daughter were poisoned. Boris Grits, the man who stabbed Ekho Moskvy radio journalist Tatyana Felgengauer last year, went on trial yesterday.

PHOTO: Demonstrators threw paper airplanes — the corporate symbol for Telegram — in front of the Moscow headquarters of the F.S.B., Russia’s secret police, to protest a ban on the popular messaging app. (Pavel Golovkin/Associated Press)