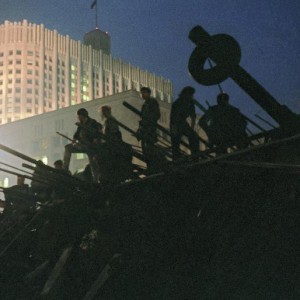 ‘We don’t rule out a full-scale Russian invasion’: Ukraine’s President Petro Poroshenko has said in a speech broadcast on Ukrainian television that ‘the probability of escalation of the conflict remains very significant’.  Russia has, RFE/RL’s Brian Whitmore agrees, surrounded Ukraine with battle-ready forces, so ‘we shouldn’t rule anything out’.  The Ukrainian President’s warning has checked the value of the ruble, which did not respond to oil’s rally above $50 a barrel.  Kiev is not happy about the CIS’s plans to send monitors to the Russian State Duma elections in the annexed region of Crimea, warning the election ‘will not have any legal consequence’ and that any monitoring of the ‘farce election will be seen as an unfriendly move’.  Former Soviet President Mikhail Gorbachev believes the West should stop interfering in the Crimean issue.  Mark Feygin, a Russian human rights lawyer known for his defence of Ukrainian pilot Nadia Savchenko, has been barred from leaving Russia in what he says is an attempt to prevent him from defending Crimean Tatars at an OSCE event in Warsaw.

Two American NGOs have been added to the Kremlin’s list of ‘undesirable’ organisations, one of them being the John McCain chaired International Republican Institute.  ‘This move is designed to send yet another unmistakable message: Russian NGOs and independent media should steer clear of foreign funders – and foreign funders should steer clear of Russia’ says Amnesty Russia.  Rosneft CEO Igor Sechin plans to sue the opposition-friendly Novaya Gazeta newspaper for libel over claims that he is linked to one of the world’s most expensive yachts.  A journalist in Nizhny Tagil has seen her house subject to a raid over songs she uploaded to her social media profile five years ago, in what she views as an act of pressure on the media.

The Defense Ministry will back a U.N. proposal for a 48-hour humanitarian pause in shelling in order to bring humanitarian aid to civilians in Aleppo.  Russia’s use of an Iranian air base to bomb rebel targets in Syria is an opportunity for Moscow to vaunt its military prowess, says the LA Times.  The Bashneft privatization has apparently been shelved to prioritise the Rosneft sale, but what will happen to the budget deficit if that has to be postponed too?  Chief of Staff Sergei Ivanov was the most recent Putin loyalist to be demoted by the President, but the purge of close allies has removed a set of informal checks on the leader, says analyst Gleb Pavlovsky, and ‘that can only be dangerous’.   Take a look back at the 1991 coup that tried to reverse perestroika – and failed.