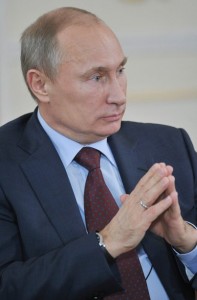 The Kremlin’s opposition is using the ‘confrontational format’ of political debate on television to help build anticipation for this weekend’s online election of the Coordination Council, a non-parliamentary opposition organisation.  The Internet vote will be held to choose a ‘shadow parliament’ to create solidarity in the disparate opposition movement, although ‘it is unclear what role will be played by the council’, and the Kremlin says it will ignore the vote.  The BBC says that 100,000 voters have registered to vote for 200 candidates over 48 hours.  In what appears to be part of the ongoing crackdown on the opposition, authorities have questioned Nikita Belykh, the governor of Kirov, on suspicion of misappropriating $3.5 million from an opposition party and giving it to Alexei Navalny.  A Moscow court has authorised the arrest of Konstantin Lebedev, the aide of Left Front leader Sergei Udaltsov, and formally charged him with plotting to organise mass riots, for which he could be jailed for ten years.

Rosneft has made a cash-and-shares offer for BP’s 50% stake in TNK-BP; the British company is ‘reviewing options’.  If the deal goes ahead, Rosneft will become the world’s largest oil company by output.  BP head Bob Dudley is apparently backing the deal; Bloomberg says that BP has dropped an initial offer to buy the stake after Rosneft ‘dominated the bidding’.  The Guardian weighs the reputation of Igor Sechin, Rosneft’s head and purported ‘head of the Kremlin’s siloviki clan’.  Russia’s pension fund industry is in a ‘close to catastrophic’ state, says one analyst, due to a plan to slash compulsory retirement savings and a hole in the state pensions budget.

President Vladimir Putin has spoken out against the wearing of headscarves in schools.  Prime Minister Dmitry Medvedev is ordering a review into Russia’s involvement in the Kyoto Protocol, saying that there was no need to ‘drag out’ participation, particularly given that it has awarded Russia no ‘special benefits’.  The mother of Sergei Magnitsky has filed a complaint with the European Court of Human Rights, accusing Russian law enforcement agencies of manipulating the justice system to prevent her son from speaking out about senior level corruption.  Pussy Riot member Yekaterina Samutsevich has also lodged a complaint with the ECHR.  The Atlantic has a photo report focusing on Russia’s prison system.

The Moscow Times considers the future of Radio Liberty, the last major Western station to broadcast in Russia, as it shuts off its AM signal.