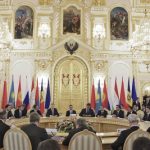 In a statement worded more strongly than any previously issued, Russia has joined the Red Cross in calling for a daily two-hour ceasefire in Syria.  The Syrian Defense Ministry is denying reports that Russian warships have arrived off the Syrian coast to deploy peacekeeping soldiers.  Vladimir Ryzhkov explains the opposition push to get the U.S. to replace Jackson-Vanik with a Magnitsky act.  Moscow officials have refused to grant permission for a rally to call for justice in the Magnitsky case.  Gay rights activists in St. Petersburg are asking the U.S., Europe, Australia and Canada to ban entry to officials behind the newly-approved ban on gay propaganda.

United Russia’s mayoral candidate in Tolyatti lost to nonparty opponent Sergei Andreyev over the weekend: ‘It turns out that the party couldn’t buy support […] This was more a vote against the party than for Andreyev’.  Brian Whitmore analyses the result, and compares Tolyatti to Yaroslavl, where opposition candidate Yevgeny Urlashov looks set to win an April 1 mayoral vote.  Using the case study of Maxim Motin, newly elected to a municipal council in Pechatniki, NPR reports on a new trend in Russian politics: power developing from the bottom up.

State-controlled television station NTV says that calls to boycott it, resulting from the anti-opposition documentary it broadcast last week, are anti-democratic and hinder the ‘free exchange of opinion’.  Two activists were arrested in Nizhny Novgorod for attempting to erect tents in a city square.  New York’s Human Rights Watch is calling on Russia to stop police from detaining peaceful protesters, in response to the detention of 100 people near Moscow’s TV tower.  Protesters gathered in Ulyanovsk yesterday to draw attention to plans to establish a NATO transit base at their airport.  A United Russia official has likened the White Ribbons protest movement to a 1990s religious cult.

Students from Moscow’s Dubna University are complaining that they were forced to attend a pro-Putin rally on March 5.  Boris Berezovsky is to set up a new religion-focused political party.  A new bill would introduce prison terms of up to two years for drug abuse, but rights activists say the move would end the rehabilitation of drug users.