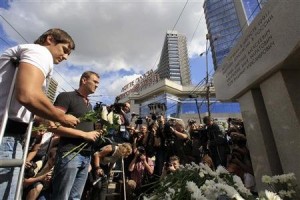 Alexei Navalny, Boris Nemtsov, Vladimir Ryzhkov and Mikhail Kasyanov all laid flowers this weekend at Moscow’s memorial to the victims of the August 1991 coup attempt against Soviet President Mikhail Gorbachev. Navalny called the end of the Soviet Union ‘a good example of a peaceful revolution’.  Many leftist activists skipped the memorial event.  Yevgenia Chirikova, who headed the protest movement against the destruction of the Khimki forest, has announced that she will run for the position of Khimki Mayor.  Accusations that Garry Kasparov bit a policeman during his arrest on Friday could land him five years in prison, whilst Kasparov says he will sue the police for ‘unlawful arrest’.  Kasparov has issued a statement and discusses the arrest in the Wall St Journal.

This reports offers a summary of some of the global protests made in response to the Pussy Riot guilty verdict and two-year sentencing; another notes various international criticism of the ruling; and there is also a round-up of the domestic outcry,  which has not included any street protests.  The Orthodox Church says it ‘forgives’ the band.  This article argues that Pussy Riot’s victory has been ‘to show up the machinery of the Russian state for what it is: scary, violent, punitive and male’.

A group of activists is suing Madonna for millions of dollars, claiming that they were offended by her open support for gay rights.

PHOTO: Prominent anti-corruption blogger and opposition leader Alexei Navalny (2nd L) and deputy of the Just Russia party Dmitry Gudkov (L) lay flowers at the monument to the three victims of the 1991 coup to mark the 21th anniversary of the August Putsch in central Moscow, August 19, 2012. REUTERS/Sergei Karpukhin