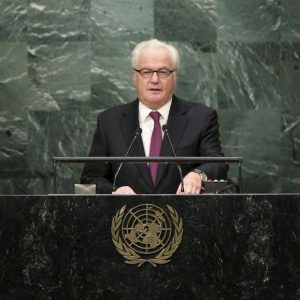 Vitaly Churkin, Russia’s ambassador to the United Nations for the past decade, has died suddenly at the age of 64, following what was reported to be a cardiac condition.  Known as a Putin loyalist skilled in deflecting accusations, recently in particular with regard to aggressive foreign policy in Ukraine and Syria, he was remembered fondly by sparring partner Samantha Power, his U.S. counterpart, who said she was ‘devastated by the news’.   Russia’s foreign ministry has asserted that a decree to recognise passports issued by rebels in eastern Ukraine is in accordance with international law.  ‘The recognition of passports from the contested regions creates a loud bang for very little buck. But seeing it as step towards real recognition of the breakaway republics would be too much’, argues the Moscow Times.  A plan submitted to the White House for a Ukrainian peace plan that involves a Ukrainian referendum on whether it should lease Crimea has been denounced as absurd by Kremlin spokesman Dmitry Peskov for, ‘how can Russia lease its own region?’

According to a new study by RBS news, Russian TV has significantly reduced its references to Donald Trump, apparently as a result of Kremlin orders.  What has it replaced it with?  Patriot-bashing, it would seem, if Dmitry Kiselyov’s most recent edition of Vesti Nedeli is anything to go by.  Media curiosity has been piqued by claims that a psychological report on Donald Trump is being prepared for Vladimir Putin.  Prominent German nationalist politician, Franke Petry, has apparently held talks in Moscow to discuss cooperation with Russian lawmakers, among them senior members of United Russia.

Sanctions or no sanctions, the Russian economy will face ongoing problems if it fails to introduce tax reforms, says top state economist Vladimir Osipov.  In an attempt to stymie the shadow economy, the government is mulling a ban on cash payments for salaries and limiting those on cars and apartments.  In December, Russia overtook Saudi Arabia as the world’s largest crude producer.  Two years after his murder, a new documentary, ‘The Man Who Was Too Free’, examines the life and death of opposition politician Boris Nemtsov.

PHOTO: Vitaly Churkin, Russia’s ambassador to the United Nations, who has passed away at the age of 64, is seen here in 2014. (Andrew Kelly / Reuters)