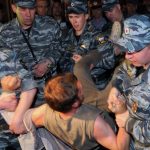 TODAY: Medvedev and Obama have informal meeting on G8 sidelines as Medvedev organises his cabinet; Putin’s new government dominated by those loyal to his project; Kremlin compiles dossier of its Public Chamber members’ fidelity; police arrest dozens at Moscow camps; NATO says missile defence shield up and running; blue lights of privilege on cars to be halved.

Prime Minister Dmitry Medvedev and U.S. President Barack Obama met on the sidelines of the G8 summit at Camp David, insisting that the ‘reset’ of relations between their countries is still on. Medvedev’s attempts to form a Cabinet are being hampered by candidates’ unwillingness to work in the government, in some cases in relation to the balance of power.  It is thought that Arkady Dvorkovich and Igor Shuvalov will both join his team.  Putin’s new government is to be ‘dominated by loyalists’, says Reuters.  President Vladimir Putin has nominated an anti-protest tank factory employee as his new Urals envoy, demonstrating his eagerness ‘to make political decisions single-handedly regardless of appointees’ qualifications’.  The Kremlin has reportedly compiled a dossier on the 126 members of its Public Chamber to evaluate their loyalty and willingness to follow orders.  Deputy Foreign Minister Sergei Ryabkov alleges that military action against Iran is still being considered in some Western countries, although he did not name names.

Police made a reported 70 arrests at Moscow’s ‘Occupy-style camp’, where hundreds had gathered to protest at a new location over the weekend, after the original camp at Kudrinskaya Ploshchad was cleared on riday night.  A further ten arrests were apparently made early on Sunday morning at the relocated camp on Stary Arbat street, and a camp was broken up by police last night, who based their arrests on the lack of documentation for the protesters’ ‘kitchen’ (distribution of donated food).  The Federation Council is considering introducing a ‘green filter’ to assess any draft bill’s potential impact on the environment.  Vladimir Putin has ordered that the number of blue lights assigned to official vehicles be halved.  NATO has announced that its missile defence shield is now ‘up and running’ – Russia is still concerned that the shield will affect its own deterrent power.  The new French President Francois Hollande says Russia should not feel threatened by the shield.  Dmitry Medvedev says that Russia is capable of withstanding global economic problems this year, at least partly due to last year’s budget surplus.

NPR reports on the posthumous trial of Sergei Magnitsky.  The U.S. adoptive mother who sent her Russian adoptee back home on a plane has been ordered to pay $150,000 plus monthly child support.