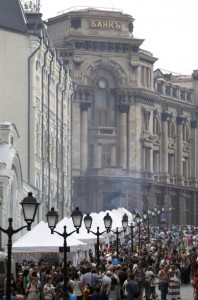 Independent pollster the Levada Centre, which conducts public surveys, has warned that it may have to close down in response to government insistence that it label itself a ‘foreign agent’, with the group’s director adding that the call ‘undermin[es] our credibility and reputation’.  The group’s foreign grants reportedly amount to no more than 3% of its total funding, but prosecutors have ruled that, because its polls influence public opinion, its work ‘does not constitute research but political activity’ (its latest poll reveals an increase in the number of Russians using the Internet). Vladimir Ryzhkov writes that the Kremlin’s goal ‘is to completely block foreign funding of all NGOs and to shut down those that resist the ban’.  According to Human Rights Watch, over 50 groups have now been targeted.  In response to the latest barrage of criticism, issued in response to the ‘foreign agent’ law and new measures against homosexuality, the Foreign Ministry suggested that the European Union refrain from ‘ideology-based’ remarks.  Many people working closely with the Skolkovo business center, including former Kremlin chief of staff Vladislav Surkov, believe that recent Investigative Committee corruption cases against the project are politically motivated.  Skolkovo’s president, billionaire Viktor Vekselberg, is being questioned by the Investigative Committee in connection with embezzlement accusations made in relation to a research salary paid to State Duma Deputy Ilya Ponomaryov.

Economic growth figures have emerged higher than the economy ministry’s forecasts, but are likely driven by consumption, and growth overall is weak.  Prime Minister Dmitry Medvedev says Russia has a good chance of avoiding economic recession.  Former Finance Minister Alexei Kudrin says United Russia should take full responsibility for Russia’s current ‘stagnation’ and lack of ‘internal stimulus’.  ‘Kudrin is one of the few people in the elite that can dance this way with Putin and get away with it,’ says Brian Whitmore.  The Finance Ministry says it will not go ahead with a proposal to increase crude oil production tax.

‘As long as Mr. Assad can count on military and political support from Russia, he has no incentive to agree to a cease-fire or a political transition.’  The generosity of oligarchs and state firms paying for the $51 billion 2014 Sochi Winter Olympics is the result of ‘a sort of tax’ imposed by Vladimir Putin, says a former Kremlin official.  In accordance with a Moscow court decision, the alleged kidnapping of opposition activist Leonid Razvozzhayev will not be investigated.

Is there a Eurovision Song Contest scandal brewing? ‘It is of serious concern and surprise that at the final count of votes from Azerbaijan, Russia was not given any points’.

PHOTO: Pedestrians walk past a Bank of Moscow branch in Moscow May 19, 2013. Foreign banks that once treated Russia as an undiscovered country where easy money could be made are now finding it a cut-throat market tougher than some bargained for. Picture taken May 19. REUTERS/Sergei Karpukhin