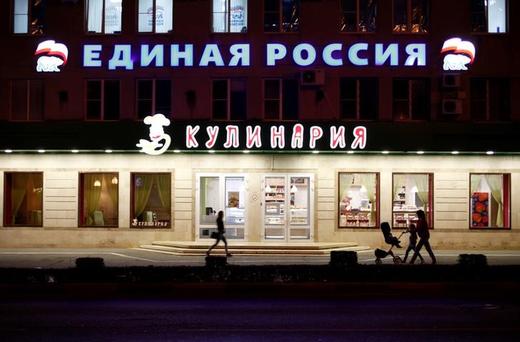 In a rare public statement, the head of the CIA’s Russia unit says he is anticipating that Vladimir Putin will run for re-election in 2018, and likely will build on the renaissance of ‘KGB Putin’ with a tightening up of authoritarian measures to keep order. (In line with  that the FSB is likely to be upgraded to a Soviet-style MGB.) Putin has been citing the words of Ivan Ilyin, ‘a prophet of Russian fascism’, in his annual speeches to the Federal Assembly for some years, notes this piece.  Oleg Vorotnikov, a founding member of the Russian underground art collective Voina who is wanted in Russia, has been detained in the Czech Republic; the collective’s stunts included the painting of a giant phallus on the drawbridge near the FSB office in St Petersburg.  NATO has rejected Russia’s proposal for new air safety measures that would have required all planes in the Baltic to fly with operational transponders; the alliance argues that the proposal would do nothing to prevent the near misses with Russian jets that have happened in recent weeks, with some calling it a bid to distract from the goal to get Russia to increase transparency about its military exercises.

The UN has suspended overland aid deliveries in Syria, after the US claimed that Russia dropped bombs onto a UN aid convoy in Syria, destroying it and killing 20 people, and Western news organs have responded, calling the attack ‘a new low’; but Moscow denies that the attack was carried out by either Russian or Syrian planes. America’s UN ambassador, Samantha Power, says Russia needs to push the Syrian regime to end the current conflict.  Barack Obama, in his final UN speech as US President, warned Russia that its current foreign policy approach (a bid to recover what he called its ‘lost glory’, ouch) is making its borders unsafe.

The President will personally oversee the launch of Russia’s northernmost onshore oilfield at Vostochno-Messoyakha. Voters (or possibly stuffed ballots posing as voters) re-elected a United Russia politician to his seat in Tver, despite his rape conviction.