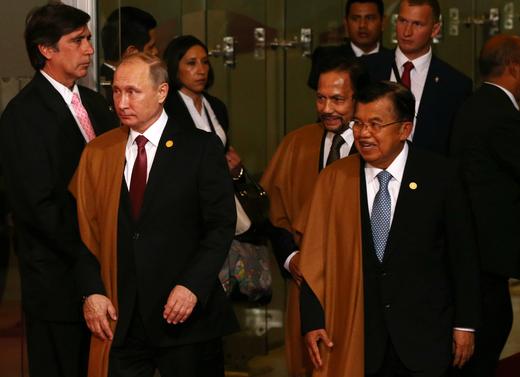 Following the completion of the APEC summit in Lima, Peru, President Vladimir Putin summed up the gathering as focused mainly on economic development ‘in an absolutely quiet manner, in the usual mode’; he distanced himself from the notion of ‘secluded‘ trade associations, saying that they would not benefit the economy on a global scale.  Putin had his first meeting with Philippine President Rodrigo Duterte during the Summit, who sided with Russia against the ‘bullying’ and ‘hypocrisy’ of the US.  Putin spoke with US President Barack Obama ‘for around four minutes’ on the sidelines of the summit, just long enough for Obama to raise the issues of Syria and Ukraine.  Bombing in Syria’s Aleppo has destroyed the city’s last remaining hospital, after strikes began again last Tuesday.  The Russian Ministry of Defence says the notion that hospitals and schools in Aleppo were bombed by Russian forces exists only ‘in US State Department spokesman John Kirby’s imagination’.  On its Twitter page, the Ministry is drawing attention to the US military’s deadly air strikes in Iraq and Syria.

Amnesty International’s Russian branch announced its plans to return to its Moscow office following its seizure (‘a mistake’) earlier this month.  The organisation is calling on the Kremlin to suspend the controversial ‘foreign agents’ law, saying that it restricts freedom of expression and has hampered or entirely shut down the work of a number of non-government organisations in Russia.  Given the major role that Orthodoxy has played in Russian history for centuries, says President Vladimir Putin, the two should be considered inseparable.  Three Orthodox priests held single-man pickets to protest the law against ‘offending religious believers’, arguing that no one except God can protect their feelings.  The new anti-doping chief told WADA that Russia has never had a state-sponsored doping system.

The Health Ministry has cut next year’s budget for HIV medications by 13.5%, as this piece accuses the government of trying to ‘wish away’ its HIV epidemic.  The New York Times discusses the new Estonian Prime Minister’s party’s links to United Russia.