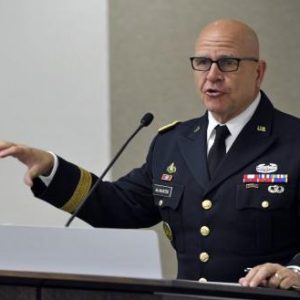 TODAY: Kremlin refuses to bend on Trump contact claims; new U.S. national security advisor an unfavourable choice for Russia?  Ukrainian oligarch Dmitry Firtash arrested; UK edging closer to a Magnitsky Act of its own; Russia and Libya strengthen ties in oil; Gudkov will run for Moscow mayor; Kremlin hoping to get as many voters as possible to polls next year.

Kremlin officials continue to maintain that Donald Trump’s team had contact with high-ranking diplomatic staff doing the presidential election campaign, despite Trump’s best efforts to deny links.  The announcement that President Trump’s new national security advisor will be Army Lieutenant General H.R. Mcmaster ‘may be the final nail in the coffin for Moscow’s dream of a speedy detente with Trump’, says the Moscow Times.  McMaster is known for having tough views on the Kremlin in contrast to the more lenient seeming President.  Secretary of State Rex Tillerson and Foreign Minister Sergei Lavrov have apparently been in touch to discuss bilateral relations, following the untimely death of UN ambassador Vitaly Churkin, but details of their exchange have not yet been released.   The one-time business partner of ex-Trump campaign manager Paul Manafort, Ukrainian oligarch Dmytro Firtash, contact with whom drew considerable unwanted scrutiny to Trump’s Russia’s links, is facing extradition to the U.S. over bribery charges following a European arrest warrant.

If approved by the House of Lords, an amendment to the Criminal Finances Bill will make the UK the second European country after Estonia to adopt a Magnitsky Act, designed as a punitive action against Russian officials responsible for the death of lawyer Sergei Magnitsky.  A former minister from the Labour party has argued that there is ‘clear evidence’ that Russia interfered directly in UK elections and that Russian infiltration had compromised high level decisions on security.  Oil giant Rosneft has signed an agreement with the Libyan national oil corporation on exploration and production that will considerably deepen relations between the two sides.  Ukraine’s Permanent Representative to the UN apparently received orders to block the adoption of a statement by the chair of the UN Security Council devoted to late Russian envoy to the UN, Vitaly Churkin.

According to a new Levada poll, Russian attitudes towards compulsory military service are becoming increasingly favourable.  Dmitry Gudkov, the last opposition politician to have served as a Duma deputy, has announced he intends to be ‘the only democratic candidate’ to run for mayor of Moscow in September 2018.  The Kremlin is hoping to see record voter turnout in next year’s presidential elections, with the aim of beating Dmitry Medvedev’s record of 70% turnout in 2008.  President Putin has ordered the entire demolition of Moscow’s ‘Khrushchevkas’: Soviet housing blocks synonymous with the city’s rebuild after World War Two.  Myths about the President are explored and explained in this Putin-dedicated issue of the Guardian’s Long Read.