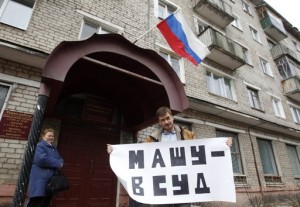 Foreign Minister Sergei Lavrov weighed in on the topic of the Eurovision Song Contest during a meeting with his Azerbaijani counterpart, where he called Azerbaijan’s failure to award any points to Dina Garipova’s entry  an ‘outrageous incident’, and threatened that it ‘will not go unanswered’.  Prime Minister Dmitry Medvedev insists that he does not mind being referred to as ‘Dimon’, the diminutive nickname given to him by web users. ‘This is how I was called in my childhood. It’s all trifle.’  Medvedev is calling for Russia to start providing its military with superior weapons to those of their Western counterparts.  The case against tycoon Alexander Lebedev is falling apart after most of the prosecution’s witnesses failed to attend a court hearing, but Lebedev says he is expecting a guilty verdict from the ‘trumped up, fabricated’ trial nonetheless.  A new case against five men suspected of involvement in the 2006 murder of journalist Anna Politkovskaya has been sent to court.  It has been revealed that Thomas Firestone, the former U.S. Justice Department official who was declared ‘persona non grata’ and barred entry to Russia earlier this month, once worked for a law firm that investigated white collar corruption and bribery, and that Firestone was a vocal advocate for the release of Sergei Magnitsky back in 2009.

Europe’s crude oil refineries could see a wave of closures in response to ‘a flood of Russian diesel fuel’.  VTB’s $3.3 billion share offering will close this week, with hefty investments from three sovereign wealth funds.  In the wake of Société Générale’s banking troubles over the Rosbank bribery scandal, Reuters has compiled a factbox on foreign banks currently operating in, or quitting, Russia.  Rosbank is currently cutting ‘hundreds of back office jobs’ at its Moscow headquarters.  Soft power initiatives have been employed in a bid to combat ‘a downward trend in Western public opinion about Russia’, not alleviated by a recent string of PR failures, says the Moscow Times.  The Kremlin’s current economic policies (which don’t appear to be working to stimulate growth) may be linked to Sergei Glazyev, former trade minister and now economic adviser to Vladimir Putin, writes Anders Aslund.

Russia’s ability to use the past to alter the way people think about the present is a very powerful political weapon, says Al-Jazeera, and still very much in use, as Kremlin officials seek to make criticism of Russia’s role in World War II illegal.  Duma lawmakers are moving forward on plans to impose jail sentences for blasphemy, with the bill in question winning 304-4 in its second reading.