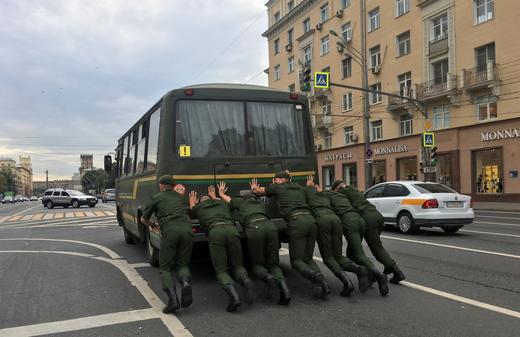 The Foreign Ministry responded to this week’s hacking accusations from Microsoft, denouncing the company for engaging in “a witch-hunt that has engulfed Washington”; the Kremlin said it didn’t know “what hackers they are talking about”. Sergei Lavrov accused the UK of trying to dictate policy to the EU and US by calling for sanctions in the wake of the Novichok poisonings. “Our British colleagues have quite a high opinion of themselves,” he said. The US is threatening further sanctions if Russia does not change, and added shipping companies and vessels to its existing list in response to the alleged Russian transfer of petroleum products to North Korea. The head of one of the companies targeted said he was unable to comment as “I don’t understand what the problem is”. In response to more extensive sanctions, in conjunction with reducing its holdings of US bills, the Central Bank has added a high volume of gold reserves this month, bringing its stockpiles to $77.4 billion. This piece argues that Russia doesn’t have enough pull to swing international trade currency away from US dollars, unless China and the yuan are brought on board.

Vladimir Kara-Murza writes in the Washington Post about last month’s killing of three Russian journalists in the Central African Republic (CAR) who were investigating Wagner Group, the Putin-linked Russian mercenary organization “clouded in unusual secrecy”, which has apparently been involved in conflicts in eastern Ukraine and Syria. More mysterious yet, Russia just yesterday signed a military cooperation agreement with the CAR. In contrast with the Moldovan President, the country’s economic minister would rather wait for a new Romanian gas pipeline to be built than sign up for a new contract with Gazprom. As Facebook removes 652 fake, politically-oriented accounts linked to Iran and Russia, more than 70% of Russians were found to believe that Russia did not interfere in the 2016 US presidential elections.

The Austrian foreign minister has come under further criticism for inviting Vladimir Putin to her wedding, over images of her making a deep curtsey to him during their waltz. “A formal curtsey is a major element of Viennese ballroom etiquette,” according to a Viennese dance expert. This Guardian piece called the waltz “a dagger in the heart of European liberal values”.