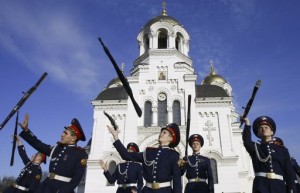 Yesterday’s gay rights demonstration against a new nationwide bill targeting the LBGT community ended in violence after a counter group of Orthodox activists showed up to throw eggs and ketchup at protesters; police reportedly stepped in to break up fighting.  A Moscow court upheld the four-and-a-half year jail sentence of Maxim Luzyanin, who was found guilty of mass disorder during last year’s May 6 protests.  Opposition activists are planning to gather at Vladimir Putin’s reception office this Saturday to call for the release of all those arrested in connection with the same protest – a further 20 people are still either awaiting trial or under investigation.  One of them, activist Sergei Kirov, has been on hunger strike for 40 days in protest against his arrest.  The suicide of activist Alexander Dolmatov in a Dutch extradition center, supposedly over the news that he would have to return to Russia, ‘has highlighted the challenges for Russian opposition members to get political asylum in Europe’.  The chairman of the Consumer Rights Defense Society is being charged with slander for comments he made about Moscow’s Christ the Saviour Cathedral having turned into a business center for ‘accommodating 15 commercial firms, a car wash, a car maintenance center’ and other enterprises.

Foreign Minister Sergei Lavrov says that ‘of course’ Russia will retaliate for ‘unfriendly acts’ against it by the United States, but insists that ‘at the core of our position is the development of Russian-American links in all fields’.  The Supreme Court says that all Russian children whose U.S. adoptions were approved before January 1 of this year will be allowed to go home with their families.  Vladimir Ryzhkov proposes that the adoption law will be ‘the straw that breaks the Kremlin’s back’.  A plan to close a St Petersburg hospital specialising in children’s cancer is drawing outrage.  Russia has begun a partial evacuation of its citizens from Syria, moving 80 people to Lebanon, with critics reading it as a lack of faith in the Syrian regime’s ability to contain the ongoing violence.  But Lavrov says that no ‘mass evacuation’ is planned, because the situation ‘does not require’ it.  Igor Sechin says he thinks that $130 billion is a fair value for Rosneft.

Prime Minister Dmitry Medvedev’s imminent appearance at the World Economic Forum in Davos, at which he is apparently planning to persuade investors with a speech about corruption, sparks this FT evaluation of the last decade of Russia’s economic growth.  Liberal Democratic Party leader Vladimir Zhirinovsky, meanwhile, wants the use of English and other foreign words with Russian equivalents to be banned.  Former prima ballerina Galina Stepanenko is filling in at the Bolshoi for artistic director Sergei Filin, whilst he undergoes surgery following an acid attack.

PHOTO: Cossack cadets toss their rifles as they practise for an upcoming performance outside a cathedral in the southern Russian city of Novocherkassk January 22, 2013. REUTERS/Vladimir Konstantinov