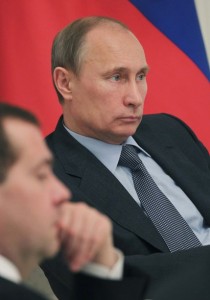 President Vladimir Putin will hold his annual live Q&A session later this week, and organisers have apparently already received almost half a million questions, largely of a social services nature, as well as regarding ‘U.S. visa restrictions in the wake of the Boston bombings’, according to the show’s website.  Putin says the economy is showing ‘alarming signals’ of slowing, and called for urgent action to stimulate growth, which is at its weakest pace since 2009.  This Moscow Times piece discusses Russia as an ‘unnecessarily poor’ country.  The trial of rights activist Konstantin Lebedev began in Moscow yesterday, with expectations that he will be sentenced later this week on charges of organising violence at the Bolotnaya Square protest last May, to which he pleads guilty.  Masha Gessen provides an overview of a number of next week’s significant pending court cases against opposition activists, including Alexei Navalny and Pussy Riot, noting that the courts are now ‘virtually the only point of contact between an individual or organization and the state’.  Thanks to a ruling by the Constitutional Court, Russian voters will be allowed to appeal election results.  The Atlantic looks at the case against Navalny as directly relating to his desire to work in public office, and notes that either a prison or probationary sentence would bar him from this goal.  Dmitry Peskov, the Kremlin’s spokesman, says he hopes that Russia will soon develop a ‘constructive opposition’.  He also slammed foreign media for using ’10-year-old stereotypes’ when reporting on Russia.

An Egyptian minister says it has been agreed that Russia will help Egypt develop its nuclear power program.  Grain exports have jumped 57% this month thanks to a drop in domestic prices.  Lukoil is to boost its spending this year to $20 billion.  The Kremlin may accede to the European Union and accept its Third Energy Package as a response to the shale gas boom, which could involve dividing up Gazprom.  Online store Amazon is planning a move into Russia.

Georgy Bovt points out that the Boston bombers were born in Kyrgyzstan, not Russia, and notes that ‘the average person thinks that since Chechnya is in Russia, the Boston terrorists suspects must be Russians’.  Investigators are reportedly focusing on a trip made by Tamerlan Tsarnaev, one of the bombers, to Dagestan last year, to discern whether their radicalization was related to foreign terror groups.  The Guardian wonders why he was allowed into Russia, given that he had been questioned by the FBI in 2011.

PHOTO: Russia’s President Vladimir Putin chairs a meeting on economic policy at Bocharov Ruchei state residence in Sochi, April 22, 2013. Putin called on Monday for his government to draw up a package of measures to boost economic growth, while warning against changes to the country’s recently adopted fiscal rule. REUTERS/Mikhail Klimentyev/RIA Novosti/Pool