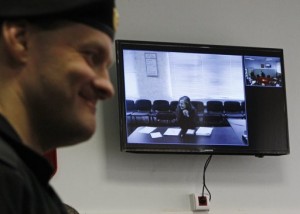 Amnesty International’s country-by-country annual human rights report for this year remarks that Vladimir Putin’s return to the presidency has curbed freedom of assembly and created ‘broadly weakened dissent’, adding Pussy Riot members and Bolotnaya Square protesters to its list of prisoners of conscience.  The criminal case against the twelve opposition activists accused of participating in ‘mass riots’ at the Bolotnaya rally last May has been sent to court.  Jailed Pussy Riot member Maria Alyokhina has gone on hunger strike in protest against a court decision to bar her from her own parole hearing, and banner her lawyers from further representing her. ‘Let the troika sitting here – the judge, the prosecutor and the colony employee – decide my fate.’  Paul McCartney is the latest celebrity to throw his weight behind Alyokhina’s case, in a handwritten letter to the Kremlin urging hers and Nadezhda Tolokonnikova’s release.  Kirov region governor Nikita Belykh was summoned by state prosecutors as a witness in the trial against anti-corruption blogger and opposition figure Alexei Navalny; according to his testimony (video), Navalny is not guilty and that the charges against him are ‘dubious’.  But Navalny maintains certainty that he will be convicted for political reasons nonetheless; and this extensive report on politicised court cases and the justice system notes that, according to current statistics, less than 1% of all verdicts issued in Russian courts are ‘not guilty’.

In the wake of his arrest on bribery charges, Vladimir Golubkov has been dismissed from his CEO position at Rosbank by parent company Société Générale.  Golubkov’s assets have been seized, including properties and bank accounts.  VTB says it will sell its stake in Rosbank before the end of the year.  Reuters looks at current challenges facing foreign banks in Russia.  The head of the Council of Europe is demanding that Russia permit gay rallies. ‘This is a fundamental principle in the European Convention on Human Rights.’  The Council has announced that it will expand its Russian office and begin working with the government on a list of projects which, it says, is a sign that Russia takes the group seriously.  In advance of today’s conference on European Security, Deputy Defence Minister Anatoly Antonov highlighted a ‘lack of trust’ between Russia and Europe and called for the two sides to make their security ‘indivisible’.

Vladimir Putin is increasingly centralising his control of the government, says a new research report.  Sergei Pridkoho has been formally appointed as deputy prime minister and Kremlin chief of staff.  According to a new draft, still yet to be signed by Putin, Russia is planning to switch to a new tax formula for natural gas producers that takes energy price into account.  French actor Gerard Depardieu has praised his ‘special relationship’ with Chechen leader Ramzan Kadyrov.

PHOTO: Jailed Pussy Riot punk rock group member Maria Alyokhina is seen on a monitor, as she takes part in a video conference from the penal colony, inside the courtroom during a hearing in the town of Berezniki May 22, 2013. REUTERS/Maxim Shemetov