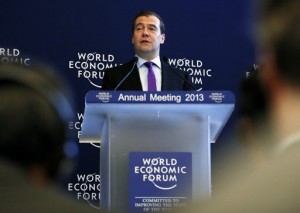 Speaking in Davos at the World Economic Forum yesterday, Prime Minister Dmitry Medvedev dismissed concerns that Russia will face further civil unrest if it does not embrace economic and political reform, with many of his opponents concerned about Russia’s dependence on the price of oil.  Medvedev speculated that Gazprom could lose its monopoly, but stressed that any such move mustn’t impact the economy: ‘Money comes first.’  Foreign investors apparently expressed to Medvedev their concern about poor relations between Russia and the E.U., and the difficult work environment this creates.  Russia’s gasoline prices are showing an ‘untraditional’ rise this month thanks to higher fuel taxes and the ban on Euro-2.  The State Duma has ‘overwhelmingly passed’ the first reading of a bill that would grant regional assemblies the right to abolish direct elections for governors, effectively allowing President Vladimir Putin to choose candidates instead.  German Gref wants Russian-owned banks to be exempted from legislation that prohibits state officials from keeping their money in foreign bank accounts.  Anti-smoking campaigners are hoping that a bill to ban smoking in public will be signed into law.

Media tycoon Alexander Lebedev has compared the trial against him for fighting with Sergei Polonsky on state television to the McCarthy witch trials.  The Defense Ministry’s guidelines for checking the sexuality of conscripts apparently advises carrying out physical examinations and ‘checking for tattoos in intimate places’.  Jailed Pussy Riot member Maria Alyokhina has complained of receiving death threats and suffering abuse at her prison colony, but insisted that she did not regret her participation in the group’s protest.

Moscow’s City Court is insisting that activist Sergei Udaltsov’s complaints about the criminal case against him be taken into consideration.  In the wake of the ban on U.S. adoptions, Russians are debating the fate of children in state orphanages who have been separated from their living parents.