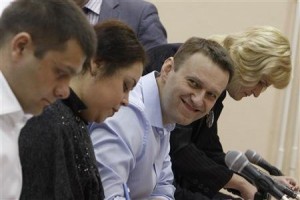 The trial against anti-corruption blogger Alexei Navalny reopened today in Kirov, and was promptly adjourned to allow the judge to consider a request by Navalny’s lawyers to return the case against him to his prosecutors, due to what they are calling procedural errors.  An independent investigation blames police and authorities for inciting violence at last year’s anti-Kremlin Bolotnaya Square protest last year, claiming that riot police used ‘excessive force’ against demonstrators – many of whom are now in prison or facing charges for participating in mass unrest.  The new investigation, sponsored by ‘non-parliamentary political opposition’, studied various witness testimonies, footage, and photographs, and alleges that ‘there were no mass riots on Bolotnaya but “separate actions of self-defense” by some protesters’.  New reports alleging that Syria used chemical weapons against its own population may at last provide an issue on which Russia and the U.S. can agree to pressure President Bashar al-Assad to hand over power.  U.S. Secretary of State, John Kerry, says that cooperation with Russia is desirable, but would be ‘very difficult’.  Reporters Without Borders has released information about two separate violent attacks on journalists in Novosibirsk that took place earlier this month – one of them, on Andrei Chelnokov, the head of the Union of Novosibirsk Journalists, and the other on Boris Komarov, whose company Uniton-Media owns several news media outlets.

President Vladimir Putin has reportedly instructed First Deputy Prime Minister Igor Shuvalov and aide Elvira Nabiullina to make development proposals by next month ‘which would meet the needs of our economy as much as possible in view of securing its growth rate’.  The President of the European Bank for Reconstruction & Development says Russia must diversify its economy away from oil and gas if it wants to spur economic growth.  Mikhail Fridman’s Altimo has secured a $3.2 billion loan from Sberbank.  Rosneft’s gas development after 2020 will aim to reach an output of 100 billion cubic meters per year – it is currently producing 40 billion cubic meters per year, having completed its acquisition of TNK-BP.  It has also revealed plans to seek an alliance with potential partners in Iraq.  Rosneft head, Igor Sechin, responded to investor complaints of unfair treatment by insisting that the company is not a ‘charity fund’.  Alexei Navalny’s request for a disclosure of Rosneft’s board meeting minutes relating to its 20-year supply contract with China has been denied.

A member of the alleged Boston bombers’ extended family has suggested that they were the victims of a Russian plot, aimed at ‘convinc[ing] the West that an Islamist insurgency being waged across Russia’s North Caucasus had gone global’.  Lara Vapnyar explains: ‘The Tsarnaev brothers are being labeled “Russian” even though they come from a region that has been in an on-and-off again war with Russia for centuries.’  A suspect has been detained in Belgorod in connection with the shooting massacre of six people earlier this week.  Roman Abramovich has been ranked the most generous Russian philanthropist.