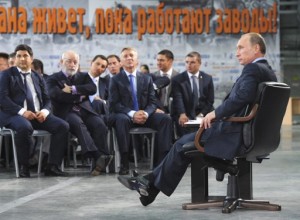 Vkontakte, a popular social network with over 210 million users, has been banned from distributing content across Russia, thought to be in connection with the forum’s use by opposition leaders to organise protests.  Rights group Memorial is in court today to fight state prosecutors who want it to register as a ‘foreign agent’.  Memorial head, Alexander Cherkasov, said, ‘We’re not sitting and waiting. We’re staging a counter-attack. They’re taking us back to the ideas of the (Soviet) past. It’s a sign of madness.’  This piece discusses some reasons for the Kremlin’s crackdown on long-respected pollster, the Levada Center: ‘Why is it so hard for authoritarian leaders to accurately discern public opinion and act accordingly?’  Jailed Pussy Riot member Maria Alyokhina, now on hunger strike, has had her parole request denied.  The case against Bolotnaya Square activists is ongoing; two Left Front activists had their apartments raided, and one was taken in for questioning in connection with the protest last year.  Armed police have searched the offices of a company working on developing sports facilities for the Sochi Olympics.  Deputy Prime Minister Igor Shuvalov says the country will avoid recession this year, despite ‘insufficient’ growth. Russia’s poor economic growth situation is seen by many as a political problem, requiring ‘the protection of property rights, an effective and independent judiciary and fair competition’; and Vladimir Putin is incorrect to blame a slack cabinet, says Bloomberg.  But Putin has always had ‘an eye out for betrayal’, according to his early biographer. ‘He suffers from an inability to trust people.’

Witnesses in the trial against newspaper tycoon Alexander Lebedev have admitted they were pressured into attending the court case: ‘I went to the Investigative Committee about a completely different matter and they said, “Do you remember that television programme? We need witnesses.”’  Speaking at a meeting of entrepreneurs held to discuss the release of thousands of businesspeople imprisoned for financial crimes, President Vladimir Putin said the proposal needed more work.  ‘Long-standing divisions and divergent views’ were apparent during yesterday’s annual Moscow European Security Conference, with missile defense singled out as the most pressing issue.  Serbia and Russia will sign a strategic agreement today.

A new survey suggests that Gazprom is ranked the most attractive employer by business students.  The company spent more than $1 billion on its 20th anniversary celebrations.  Russia’s middle class are increasingly focused on leaving, not changing, the country, says this piece.  Following a powerful earthquake off Russia’s Far East, a tsunami warning was issued and then promptly retracted.