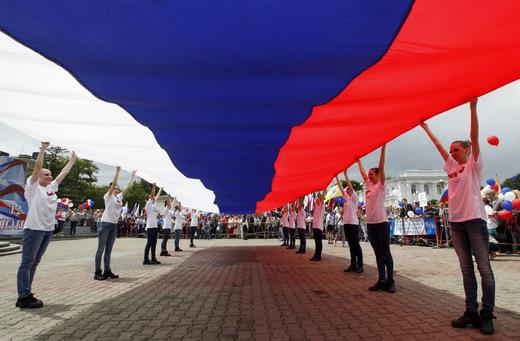 President Vladimir Putin has recommended Yury Chaika for another five-year term as Prosecutor General, despite his already having been in office for ten years, and despite recent large-scale corruption allegations involving Chaika’s family members.  The primaries held by United Russia over the weekend were rife with ‘merry-go-round voting,’ says the Moscow Times.  Mikhail Gorbachev, writing in TIME magazine, says current legislation makes it ‘impossible to hold genuinely democratic elections and ensure genuine participation by the people’.  The lawyer who will take on Russia for $330 million for its alleged involvement in the crash of Malaysian Airlines flight MH17 is Jerry Skinner, an aviation specialist who worked on the successful Lockerbie compensation case.  Olga Oliker puts the brakes on the Russia-as-nuclear-threat narrative, saying there is little evidence that Russia’s threshold for using nuclear weapons has been lowered.  The US decision to lift its longstanding arms embargo against Vietnam could threaten Russia’s dominance as Hanoi’s top weapons supplier, says VoA.

Ahead of tomorrow’s economic council meeting, former Finance Minister and now presidential adviser Alexei Kudrin says Russia has ‘reached the last stand,’ and that reform is the only way forward.  Russia yesterday launched its first sovereign debt offering since the Ukraine crisis, flexing what muscle it has left in western capital markets and generating $3 billion of demand.  44% of Russians surveyed believe that the biggest internal threat in their country is the economy, with 82% in agreement that Russia is in a long-term economic crisis.  Despite this crisis, two thirds of the executives at Russia’s biggest companies were given pay rises last year, according to reporting from RBC; Severstal was one of the few to see wages drop.

Pole vaulter Yelena Isinbayeva says banning the Russian athletics team from competing in the Rio Olympics is a violation of her human rights as a clean athlete.  France hit back at a false Russian news story portraying it as dysfunctional and ravaged by social strife.  An ‘anti-travelogue’ about contemporary Russia has won a British prize for writing that best evokes ‘the spirit of a place’.

PHOTO: Young people hold a giant Russian national flag as they take part in celebrations for the Day of Russia, May 23, 2016 (EDUARD KORNIYENKO)