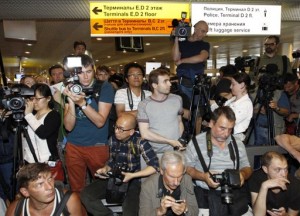 Lev Ponomaryov, the 71-year-old head of the organisation For Human Rights, was left bruised and scratched after the group was forcibly evicted from its offices over the weekend. ‘FSB operatives who were in charge of the raid were beating up people before my own eyes,’ commented Yabloko leader Sergei Mitrokhin, who witnessed the event.  Ponomaryov ‘said he had never received official notice that his lease was to be terminated and had expected Moscow to extend it, as in previous years’, and described the eviction as part of a ‘purge’.  Human Rights Watch is calling on the Duma to listen to ‘a wave of international criticism’ and reject its draft law to impose a nationwide ban on ‘homosexual propaganda’.  Two anonymous members of Pussy Riot are in London to promote the group’s message, saying that they have been ‘pleasantly surprised at how accessible British politicians were’.  They tied their mission to the homosexual propaganda law, explaining that ‘these laws are connected to Pussy Riot because they are aimed at the issues we stand for: LGBT rights and gender equality.’  Russia has submitted a proposal to UNESCO to scale back the area of St. Petersburg that is protected under World Heritage status, part of what conservationists are calling ‘an aggressive campaign to seize prized land in some of the city’s most prestigious outlying areas’.

As investors see Russia’s economy nearing recession, Elvira Nabiullina has officially taken the helm at the Central Bank as chairwoman.  Nabiullina said that the bank would embrace new methods of dealing with slowing economic growth whilst maintaining ‘continuity’, and dismissed calls to lower interest rates or weaken the rouble as ‘dangerous’.  Sberbank CEO German Gref also attempted to dispel fears of rouble devaluation.  Andrei Belousov, who favours state management of the economy, has been appointed a Kremlin aide by Vladimir Putin.  The former head of the Bank of Moscow, Andrei Borodin, has reportedly ‘infuriated’ the Kremlin by being granted political asylum in the U.K., and says that the fraud charges leveled against him in his home country ‘are completely of a political nature and fabricated’.  Under Vladimir Putin’s amnesty plan, thousands of jailed businessmen are due to be freed this year.  His proposal to combine the Supreme Court and the Supreme Arbitration Court is unpopular, with many anticipating that such a merge will deepen current problems in Russia’s judicial system.

NSA whistleblower Edward Snowden fled to Moscow on an Aeroflot flight from Hong Kong yesterday, causing a diplomatic uproar, with senior U.S. Senator Charles Schumer saying that Russia’s facilitation of Snowden’s travel will have ‘serious consequences for the United States-Russian relationship’.  Schumer said that President Vladimir Putin must have been implicated in Snowden’s travels, but the Kremlin denies this.  Russia did not respond to calls to ‘look at all options available’ to expel Snowden back to the U.S., but despite Alexei Pushkov’s comments refuting the notion that it would be ‘an act of cold war’ to grant Snowden political asylum in Russia, it is reported that Snowden has in fact applied for asylum in Ecuador, and may already be on his way to Cuba.  A diplomatic row between Germany and Russia has caused Chancellor Angela Merkel to cut short her Russia trip and cancel a scheduled speech at an art opening that was due to reference the looting of German art by Red Army soldiers.