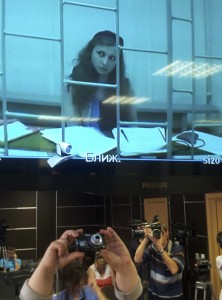 Thirteen people thus far have been freed under President Vladimir Putin’s amnesty for entrepreneurs, and thousands more could follow.  The amnesty only applies to those who agree to repay damages, and whose crimes fall under the 27 permitted, including credit card fraud and evasion of debt repayment (but not to high profile cases like those of Mikhail Khodorkovsky or Alexei Navalny).  According to an opinion poll by VTsIOM, Navalny is ‘the highest-rated challenger’ of acting Moscow Mayor, Sergei Sobyanin (albeit with 9% support to Sobyanin’s 54%).  Yulia Latynina says the Kremlin only released the anti-corruption whistleblower ‘to torture him’.  New pieces of legislation ban convicted hooligans from sports events and set higher transportation tax rates on luxury cars.

The four Dutch nationals who were detained for joining a gay rights protest earlier this week have been banned from entering Russia for three years.  Meanwhile, evidence of Russia’s treatment of gay rights activists is making its way around the web.  The jury trial of the five suspects implicated in the 2006 murder of journalist Anna Politkovskaya begins today; her children say they will boycott what will inevitably be a ‘farce’ of a trial.  Latvian violinist Gidon Kremer is planning a star-studded concert in Berlin to draw attention to Russia’s current human rights situation.  Human Rights First wants the U.S. to boycott Rosboronexport as long as it continues to supply arms to the Syrian government.  A number of sources are speculating that NSA whistleblower Edward Snowden may be given temporary political asylum in Russia and end his month-long stay in Moscow’s Sheremetyevo airport.

Russia’s only Public Television network, which begun broadcasting in Russia this May and is ad-free and free of charge, has almost exhausted its budget.  Eduard Khudainatov, the vice president of Rosneft, will leave to start his own private oil company.  Sistema’s sale of its $1.2 billion share in Russneft will help it deliver greater returns to investors, says Bloomberg.

PHOTO: Maria Alyokhina, jailed member of Russian punk band Pussy Riot, appears on a screen during a parole hearing in a court in Perm July 24, 2013. Alyokhinais appealing against a previous court decision to deny her parole. REUTERS/Gennady Novik