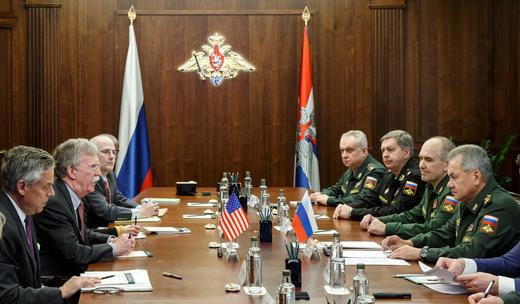 Former Finance Minister Alexei Kudrin is anticipating a deceleration in economic growth next year, “sharper than expected by the government”; he says the effect that the price of oil has on the economy “is practically exhausted”. Deputy Foreign Minister Sergei Ryabkov says Russia believes the Intermediate-Range Nuclear Forces (INF) Treaty just exited by the US to be “the cornerstone of European and global security”, and it intends to mobilise the global community in support of it. State Duma deputy Alexei Pushkov said the move will push the world towards the same conditions that caused the Cuban missile crisis. Foreign Minister Sergei Lavrov is working on a plan to address the crisis in Russia’s relations with the Council of Europe (PACE). President Vladimir Putin and his US counterpart Donald Trump will likely meet in Paris next month, although the agenda has yet to be clarified. Russia has cultivated Saudi Crown Prince Mohammad bin Salman as a key ally, and expects the controversy over murdered Saudi journalist Jamal Khashoggi to leave him unscathed. Putin has declined to acknowledge the allegations linking Khashoggi’s death to MBS, saying, “we set our policy toward Saudi Arabia a long time ago”. Moscow is preparing new sanctions that will ban some Ukrainian imports, citizens, and companies.

An educational centre created by Putin ally Sergei Roldugin has won a $30.5 million construction project to repurpose a Sochi Olympics building from 2014; and Putin’s daughter’s foundation has won a $16 million investment project with Nornickel. Responding to the accusations that Evgeny Prigozhin ordered attacks on activists and bloggers, Mark Galeotti argues that “adhocrats, whose profits and power depend directly on their relations with the Kremlin, […] appear to be on the rise”. The Defence Ministry will spend $7.4 million on software for monitoring military cadets’ online activity.

Banker Sergei Pugachev, who claims Vladimir Putin is trying to kill him, has lost his £9 million London home to state creditors in Moscow. Lev Ponomarev, the head of the For Human Rights movement, is filing a police report against reactionary right-wing group SERB for repeatedly tried to disrupt his work. The Kremlin has disclosed details of its out-of-court settlement with Exxonmobil over the Sakhalin-1 oil and gas project.