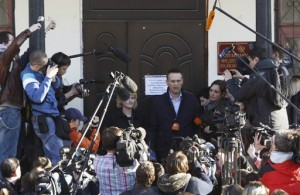 Alexei Navalny, the anticorruption blogger who once branded United Russia as ‘the party of crooks and thieves’, last night denounced the trial against him as ‘political revenge’, and called for the judge to throw it out.  All the motions put forward by Navalny’s legal defense team to delay his trial have been rejected by the Kirov court; included among the rejections was the claim that ‘The accused was given four days to familiarize himself with a criminal case that comprises 31 volumes — that is, almost 7,500 pages’.  His verdict could be delivered as early as June.  Defence lawyers for Leonid Razvozzhayev, accused of organising mass riots, claim that the extension of his custody term until August is illegal.  New restrictions on ‘golden parachutes’ (severance packages for top executives) apparently will not apply to large state monopolies.  Two Western rights organisations have jointly issued reports to call attention to an ‘ongoing assault’ on rights in Russia: the report by Human Rights Watch looks at the ‘crackdown on civil society’ in the past year since Vladimir Putin’s re-election.  Amnesty International’s report criticises the ‘foreign agent’ law that is currently creating bureaucratic obstacles for a number of Russia-based rights organisations.

President Vladimir Putin is holding his live question and answer session with the Russian public today, a ritual carrying over from his previous presidential and prime ministerial roles. Expect jokes, adulation, and outbursts…  Meanwhile, the criticisms continue: ‘The weak legal system, and poor protection of property right was noted by the [Russian Investment] Forum’s participants as one of the Russian economy’s major problems.’  Forbes discusses various points pertaining to the negative international investor perception of Russia, including corruption, the rule of law, and human rights.  A new report on a corrupt deal for the repayment of Angola’s debt to Russia reveals a network of E.U. tax havens linked to ‘powerful Angolan and Russian figures’.  Vladimir Ryzhkov comments in today’s Moscow Times that ongoing trials against participants in the Bolotnaya Square protests have ‘brought Russia back to Stalin’s era’.

U.S. officials have traveled to Dagestan to meet with the parents of accused Boston bombers Tamerlan and Dzhokhar Tsarnaev.  The brothers’ parents, as well as locals from the area where they briefly lived, say the men are innocent.  ‘Why are we […] taking the Boston tragedy to heart and looking at the Belgorod one as if it is nothing out of the ordinary?’