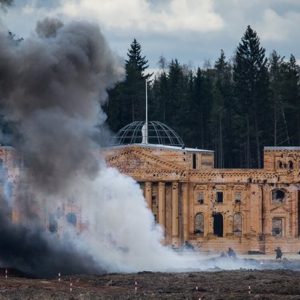 A new report by Credit Suisse has found that Russia is the most unequal of all the world’s major economies, with its richest 10% owning 87% of all the country’s wealth.  Will this lead to popular unrest? wonders the Guardian, which notes ‘there is a sense that anger may be stirring’.  Anti-corruption campaigner Alexei Navalny, a presidential hopeful who has called for a nationwide protest on June 12, has been criticised by President Putin, who has accused the Kremlin foe of opportunism.  Although most Russians still back Putin’s presidency, the boost in popularity he has enjoyed since the annexation of Crimea in March 2014 is starting to dwindle, according to the latest poll by the Levada Centre.  A Russian man who was jailed following the last major antigovernment protests in March has filed a lawsuit with the European Court of Human Rights.  The number of women in science in Russia – 41% – is reportedly a source of envy for the West.

The digital chief of the En Marche movement, at the head of which stands French presidential frontrunner, Emmanuel Macron, has said that the campaign has been targeted by the Russia-linked Fancy Bear hacking group.  Although attempts to tarnish Macron’s reputation are longstanding (in April, Sputnik suggested he was a U.S. agent) fears are mounting that with the battle in its final stages, Moscow will attempt to boost its preferred candidate, Marine Le Pen, by intensifying any covert methods to influence the campaign.  The Jehovah’s Witnesses have launched an appeal against a court ruling banning them from Russia as an extremist organisation.  This article examines the sect’s roots in Russian society.

Countries in central Europe showed the largest relative increases in military spending in 2016, as a result, at least partially, of fears of Russian aggression.  The head of U.S. and international forces in Afghanistan is ‘not refuting’ reports that Russia has provided weaponry to the Taliban.  In a military theme park near Moscow, nearly 2,000 people have participated in a re-enactment of the Red Army’s 1945 storming of the Reichstag (the mock up of which looks alarmingly like today’s Bundestag).  According to Prime Minister Dmitry Medvedev, the planned growth rate of the Russian economy of 2% this year is feasible.  Moscow continues to stand by its man in Chechnya.

PHOTO: The replica Reichstag appeared to have been modelled on the contemporary building rather than the 1945 version. (Sergei Bobylev/Tass)