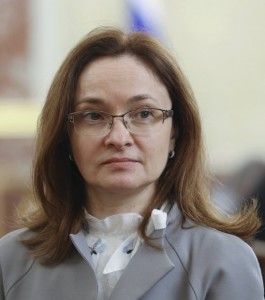 Elvira Nabiullina, the new head of the Central Bank as of yesterday, resisted calls for radical monetary stimulus and a weaker rouble, but indicated that deep structural reforms are necessary if the economy is to attain the Kremin’s goal of 5% growth.  She also promised improved access to credit, and disparaged the use of interest rates to achieve growth targets: ‘One should not use short-term methods to resolve long-term problems.’  Taking up Nabiullina’s former role as Economic and Development Minister, new appointee Alexei Ulyukayev said his main task was to prevent a recession, and indicated a more liberal economic agenda.  This report suggests that the new postings ‘enhance the influence of interventionists and further sidelines liberals who advocate a more market-oriented approach’.  Andrei Belousov, whose previous post Ulyukaev fills, is now Putin’s top economic adviser: these moves ‘set the scene for a shift towards a more activist approach to managing Russia’s economy’, says Reuters.  Prime Minister Dmitry Medvedev wants the government to focus spending on key programs to ensure efficient use of funds.

Prominent legal expert Tamara Morschchakova has been summoned by the Investigative Committee for questioning in connection with her work on an independent report that criticised the second case against former Yukos head Mikhail Khodorkovsky.  A former major shareholder of Yukos, Leonid Nevzlin, has been sentenced in absentia to 6 years in prison on charges of stealing shares from the Eastern Oil Company in collusion with an alleged Khodorkovsky-run criminal group.  The trial against last year’s Bolotnaya Square protesters has begun in Moscow.  NSA whistleblower Edward Snowden’s failure to appear on a flight from Moscow to Cuba has increased suspicion that Moscow is helping him to evade U.S. capture, and Russia’s Federal Migration Service says it sees no grounds for extraditing him, given that he has not violated Russian migration laws.  Snowden’s current whereabouts are unknown, but the U.S. is still urging Moscow to hand him over, as U.S. Secretary of State John Kerry warned that there would be ‘consequences’ if Russia or China aided his passage.  ‘Russia and Ecuador would both have reasons for wanting to aid Snowden, but it’s difficult to imagine that these include sympathy with his cause.’

For Human Rights, the organisation which was forcibly evicted from its premises over the weekend, has been given three days to remove its belongings from the space.  A United Russia lawmaker has submitted a bill that would impose criminal punishment for criticising WWII allied forces and for ‘justification of Naziism’.