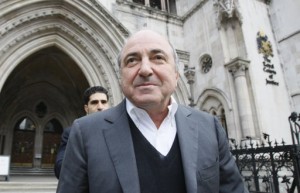 According to the postmortem examination, the cause of Boris Berezovsky’s death was ‘consistent with hanging’, and ruled out the possibility of a violent struggle, but as RFE/RL notes, the police statement did not specify whether Berezovsky hanged himself.  Luke Harding discusses the suspicions that nonetheless remain with the oligarch’s friends and family, who suspect that he was murdered: close friend Nikolai Glushkov has dismissed reports of Berezovsky’s alleged depression and financial problems, saying, ‘the idea that he would have taken his own life is bullshit’.  The Moscow Times says that Berezovsky may have been a scapegoat, but that his villainous reputation was not unfounded.  ‘Since Berezovsky’s departure for London in 2000, he has been demonized by the Kremlin as the antithesis of everything Putin stands for. But the truth is that they were once patron and protege, master and apprentice.’  Yevgeny Kiselyov discusses the relationship between Putin and ‘Yeltsin’s kingmaker’ in more detail.  Vadim Nikitin says Berezovsky ‘produced his own gravediggers’.  Prosecutors searched the Moscow headquarters of Amnesty International yesterday, part of what many opposition members are calling an ongoing campaign of pressure against rights organisations; Amnesty called the raid ‘straightforward intimidation’.

Cyprus and the European Union have reached a bailout deal which, argues the Washington Post, could be bad news for Russia in a deal that ‘was a sort of stand-off between Moscow and the E.U.’ over which of Cyprus’ benefactors would benefit most.  But Vladimir Putin has decided to back the deal, despite disgruntled rhetoric from some officials, and Anders Aslund argues that ‘Cyprus is Russia’s only true friend in the global arena’.  As part of the deal, which will impose a levy on major deposits held in Cypriot banks (affecting rich Russians who have bank accounts there), Russia will restructure the €2.5 billion loan it extended to the country two years ago.  Gazprom has reiterated that it will not give any ground in its price dispute with Ukraine.  Bloomberg has a breakdown of some of the deals brokered between Russia and China during President Xi Jinping’s trip, including doubling imports from Rosneft, and China National Petroleum Corp joining Rosneft in exploring offshore Arctic areas for oil.

Organisers of the 2014 Sochi Winter Olympics are reportedly ‘storing snow’ in case of a lack next February.  Vladimir Zhirinovsky has been re-elected leader of the Liberal Democratic Party to continue a role already spanning over two decades.  Over 69,000 new cases of HIV were registered in Russia last year.

PHOTO: In this Wednesday, March, 10, 2010 file photo, self-exiled oligarch Boris Berezovsky leaves the High Court in London after winning his libel case against a Russian broadcaster that accused him of masterminding the murder of a former Russian agent in London. (AP Photo/Alastair Grant, File)