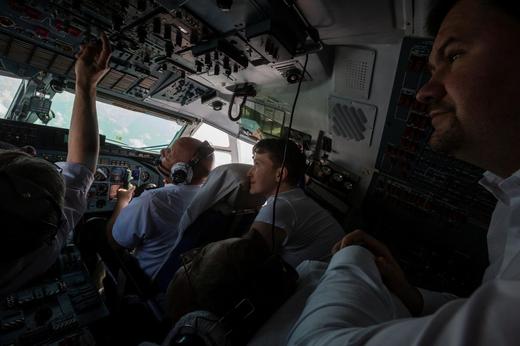 After President Vladimir Putin signed a decree to pardon former Ukrainian pilot Nadezhda Savchenko, she arrived back in Kiev to ‘a hero’s welcome’. The Guardian has video; the Moscow Times live-blogged her return.  Ukraine is hoping that the decision could contribute to the restoration of Russia-Ukraine relations.  Bloomberg says Savchenko’s return is a ‘moral victory’ for Ukraine, largely due to Savchenko’s ‘colorful defiance’ in the Russian court.  What of the 12 Ukrainians who remain behind bars in Russia on what some are calling dubious charges?  When Prime Minister Dmitry Medvedev was asked by a pensioner in Crimea how she was supposed to live on an unadjusted pension, he responded that ‘There’s just no money’: cue a thousand Internet jokes.  The wife of opposition activist Ildar Dadin described the recent burglary of her Moscow home as ‘very much like a set-up’, after a fellow activist and friend of her and her husband was arrested for it on evidence that she believes was tampered with.  No reports of yesterday’s first convening of the Economic Council in two years have yet emerged, except for this somewhat predictable news that Putin instructed the council that Russia’s budget deficit must not widen, and that inflation must be kept in check.

Russia and France are working together to reactivate their ‘mechanisms of cooperation’, according to Putin, says Putin (note that France is one of the few EU countries that wants to lift anti-Russia sanctions).  Sberbank, Russia’s biggest bank, is reporting record-breaking profits of $1.8 billion for the first three months of the year – a near fourfold increase on the same time last year.  Putin oversaw (via videolink) the first shipment of oil from a new terminal in the Arctic that will handle over 8.5 million tons of crude per year.  The FT has some more analysis on Russia’s first Eurobond since the introduction of sanctions, which was bought earlier this week but raised half of what was expected; the article notes that none of the 20 investment banks Russia originally approached about the bond, are currently working on it.

Russian banker Evgeny Buryakov has been sentenced to two and a half years in prison in the US after pleading guilty to involvement in a cold war-style spy ring.

PHOTO: Ukrainian servicewoman Nadiya Savchenko is seen in the cockpit of a plane returning to Ukraine from Russia, May 25, 2016. (REUTERS)