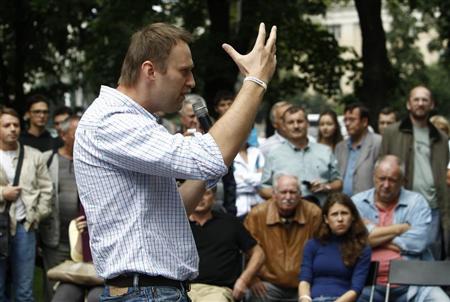 Moscow mayoral election opposition candidate Alexei Navalny was briefly detained yesterday over alleged violations during a 5,000-strong rally.  A spokesman for the police said that Navalny was ‘invited’ to a police station to give explanations in connection with illegal behaviour, but was quickly released.  The Moscow Elections Commission has apparently issued him with a warning in connection with his allegedly illegal campaign materials, ‘dispelling fears’ that he will be removed from the ballot.  Navalny is not expected to win the September 8 elections (although he is currently estimated as having about 20% of the vote), but his candidacy is seen as having various effects: for example, the ‘conclusive discrediting of the three “systemic opposition parties” – the Liberal Democratic Party, the Communist Party and A Just Russia’.  The Interior Ministry says it is planning to deploy over 56,000 security personnel during the polls.  The Kremlin is warning the western world not to attempt to influence the United Nations inspection team that will investigate a recent alleged chemical attack in Syria, saying that a military operation would be a ‘tragic mistake’.

A presidential order prohibits public protests in heightened security zones in Sochi during next year’s Winter Olympics.  The move is widely understood as a specific targeting of the gay community, with gay rights activist Nikolai Alexeyev commenting, ‘We are now showing the whole world that for us to host the Olympic games is a natural disaster.’  Critics also say that the decree is a restriction on freedom of assembly, and thus in violation of human rights.  The two remaining imprisoned members of Pussy Riot, Nadezhda Tolokonnikova and Maria Alyokhina, have drafted petitions to complete the remainder of their prison terms with community service instead of incarceration.

Rosneft’s chief executive, Igor Sechin, has bought $5.5 million worth of shares in the company (a 0.0075% stake).  A state-run sports engineering company (Sport Inzhiniring) has been chosen as the general contractor for a $3 billion project to restore arenas for the 2018 World Cup.