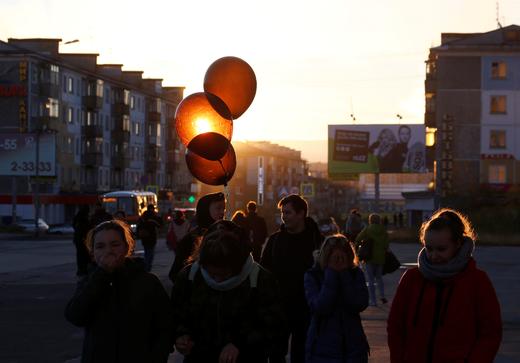 An activist group said it collected more than one million signatures opposing government plans to raise the retirement age; polls show that 90% of Russians oppose the plan. In what ay be an attempt to assuage dissent over the plan, the State Duma has made it illegal to fire workers in the five years leading up to their retirement. The news has hit hardest in remote regions with extreme weather conditions where workers have lower life expectancy than in the cities. The head of the Federal Antimonopoly Service warned against the nationalisation of Russia’s economy, which he described as “backward, semi-feudal, and especially in the underdeveloped regions there’s not even a whiff of competition.” Foreign Ministry Spokeswoman Maria Zakharova remarked on the US President not mentioning Russia during his UN General Assembly speech. “He decided not to take Russia’s name in vain, it seems,” she quipped, although Trump did warn Germany that it would become dependent on Russian energy via Nord Stream 2. Foreign Minister Sergei Lavrov accused Norway of being “brainwashed with propaganda” after it arrested a Russian parliamentary employee last week for espionage. A substantial raid on islands in southwest Finland has led to money laundering arrests for a Russian and an Estonian.

Anti-Kremlin activist Pyotr Verzilov has regained consciousness after spending “12 days in a black hole” following a suspected poisoning two weeks ago. He has been placed under German police protection after Verzilov and his close associates said they thought they were being followed. “I am spending my days in the friendly company of wonderful poisons. But not polonium 210 or Novichok, but something new and surprising,” Verzilov said. The head of Russia’s Supreme Court is calling for an end to “pointless” extremism cases based on online speech and social media posts if there is no criminal intent. Oligarch Roman Abramovich has been denied Swiss residency after a police report declared him a threat to security.

Ukraine’s Naftogaz is planning to sue Gazprom for $110 million to compensate for price discrepancies between Ukraine and Europe. The UK’s efforts to crack down on unexplained Russian money inflows are already taking effect, supposedly inspiring some to “play by the rules”. Bloomberg charts car-maker Lada’s rise to profit.