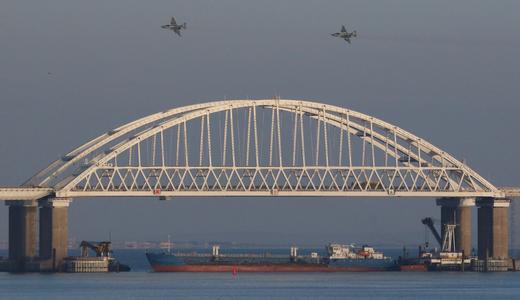 A serious clash occurred between Russia and Ukraine yesterday in the Kerch Strait, after a Russian cargo ship attempted to block access to the Sea of Azov to three Ukrainian naval vessels. Both countries have the right to use the sea, but tensions have escalated due to Russia’s annexation of nearby Crimea. Russia used weapons on the ships, injuring three sailors, and the FSB justified this by saying that the vessels ignored warnings to stop. The Foreign Ministry and the Kremlin accused Ukraine of deliberately provoking the incident, and Ukrainian navy made identical claims, releasing footage of Russia ramming one of its tugboats with a coast guard vessel. Ukrainian President Petro Poroshenko is calling for martial law, and an emergency meeting of the UN Security Council will be held this afternoon. Last night, protesters lit flares and set a car on fire outside the Russian embassy in Kiev. The Kerch Strait was reopened to shipping this morning following the incident.

Vladimir Yakunin, the former head of Russian Railways, is suing investigative newspaper Novaya Gazeta for millions of rubles for allegedly damaging his reputation by linking him to a high-profile corruption case and an assassination. Russia is looking to impose heavier fines on technology firms that fail to comply with laws regarding search engine deletions and sharing encryption keys. This piece notes that the death of Igor Korobov marks the second death of a GRU chief in two years.

During a meeting of the Organization for Security and Cooperation in Europe (OSCE), the US warned that Russia is actively working to subvert freedom of expression not just domestically, but abroad as well. Russia carried out air strikes on Syrian rebels after accusing them of launching a chemical attack on Aleppo.

PHOTO: Russian jet fighters fly over a bridge connecting the Russian mainland with the Crimean Peninsula after three Ukrainian navy vessels were stopped by Russia from entering the Sea of Azov via the Kerch Strait in the Black Sea, November 25, 2018. (PAVEL REBROV via Reuters)