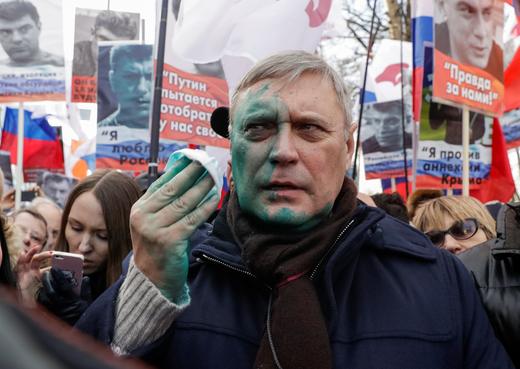 According to police estimates, 5,000 people marched in Moscow over the weekend in memory of opposition leader Boris Nemtsov, who was murdered two years ago. Other sources claimed the number of participants was as high as 15,000; and 2,000 more marched in St. Petersburg. PARNAS party leader Mikail Kasyanov, who led the march, was attacked with green paint by an unidentified assailant, who was detained by police. Nemtsov’s killers have still not been brought to justice. The march was the largest in Moscow since the anniversary march for Nemstov last year.  The activists who guard Nemtsov’s memorial speak to the Moscow Times about the difficulties they face from vandals and would-be assailants. Anti-Kremlin activist Ildar Dadin has been released from prison, after his sentence was quashed by the Russian Supreme Court; he vowed to continue his activism against the ‘false regime’ of the Kremlin and in support of human rights, so that they would be ‘respected in Russia as they are in the civilized world‘.

Samantha Power, the former American ambassador to the U.N., remembers her colleague Vitaly Churkin, who died last week, and defends herself against accusations that her fondness for him amounts to an acquiescence to Russian aggression.  The United States is calling on Russia to observe the ceasefire deal in eastern Ukraine with immediate effect.  The Trump administration says the FBI has dismissed allegations of inappropriate ties between Donald Trump and Russia as ‘BS’, despite the absence of any official statements from the FBI on the matter.  Newsweek reports on Russia’s efforts to claim more Arctic territory as its own.

The treason charges brought against two Russian state security officers and a cyber-security expert last year have been linked to allegations made by a Russian businessman seven years ago.  Daniel Johnson reviews ‘A Very Expensive Poison: The Assassination of Alexander Litvinenko and Putin’s War with the West’, by Luke Harding. Alex Larman reviews Victor Sebestyen’s new biography of Lenin.

PHOTO: Mikhail Kasyanov, Russian opposition leader, wipes his face after green paint was thrown at him during a rally to mark anniversary of murder of Kremlin critic Boris Nemtsov in Moscow, Russia, February 26, 2017. REUTERS/Tatyana Makeyeva