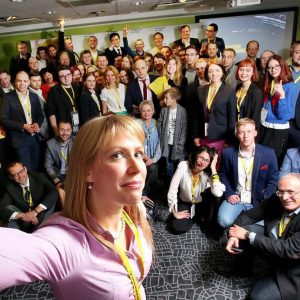 Just days before the nationwide anti-Putin protests it had planned are due to take place, Russia’s top prosecutor has blacklisted Mikhail Khodorkovsky’s Open Russia Foundation as an ‘undesirable organization’, along with three other organisations linked to the NGO.  The ruling makes it a criminal offence to work for the foundation in Russia.  The FT notes that whilst the opposition movement led by Alexei Navalny has focused lately on Prime Minister Medvedev, Open Russia’s demands are firmly focused on President Putin.  A new smart phone app, Red Button, designed especially for anti-Kremlin protesters who are frequently detained, will allow them to inform others of the place and time of their arrest.  Opposition blogger Ilya Varlamov has been attacked twice in just one day in the city of Stavropol, by men who pelted him with green ink.  A U.S. government commission on religious freedom has urged that Russia be labelled a ‘country of particular concern’, which would make it one of the world’s worst offenders of basic rights on religious worship.  The Jehovah’s Witnesses, now deemed an extremist organisation in Russia, are continuing to hold services in Moscow, on the basis of Article 28 of the constitution, which guarantees religious freedom.  In its annual listings, Reporters Without Borders has placed Russia in 148th place, behind countries such as Uganda or South Sudan, finding that it creates ‘a stifling atmosphere for independent journalists’.

A new opinion poll shows that Russians are increasingly discontented with Prime Minister Dmitry Medvedev, with as many as 45% saying he should resign.  Amid economic woes and accusations of corruption, the number of people who said they ‘fully distrusted’ the Prime Minister has increased from 14% last year to 19%.  Will Putin give his tandem partner his marching orders?  Unlikely, says former Kremlin adviser Gleb Pavlovsky, as he cannot do it ‘without making it into a present for Navalny’.  The Council of Europe has complained that Russia and Iran are among a group of countries that are increasingly misusing Interpol red notices as a way of attempting to arrest political opponents.

Russia and China have criticised Washington’s decision to begin moving parts of a missile-defense system to a deployment site in South Korea as tensions with the North grow, calling the move ‘highly destabilising’.  Foreign Ministry spokeswoman Maria Zakharova has complained that U.S. strikes on a Syrian air base violated international law and additionally, made ‘no military or political sense’.  Defence Minister Sergei Shoigu is unhappy that the strike also posed a threat to Russian troops.  The Defense Minister of Montenegro has said Russia is continuing to undermine the state’s efforts to join NATO membership.