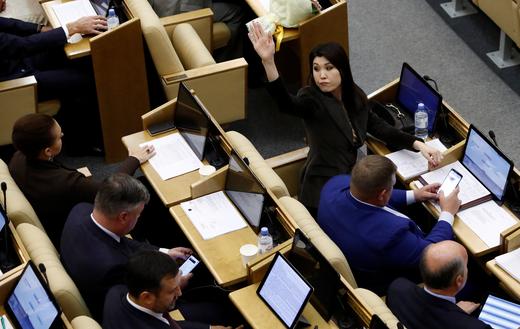 Lawmakers in the State Duma voted overwhelmingly in favour of a second reading of President Vladimir Putin’s plan to raise the pension age (326-59 with one abstention) from 60 to 65 for me, and from 55 to 60 for women, with the final vote expected today. A small group of protesters, rallied by the Communist Party, gathered outside the Duma building during the vote. This piece points out that despite some dissent in the overall vote, no one voted against Putin’s amendments; the man who organised the referendum against the bill described the Duma as “act[ing] like children around a father”. A teenage girl has written a post on Facebook about a visitation, during her algebra class, from an Interior Ministry agent who interrogated her over her joining a demonstration against pension reform earlier this month. A senior Kremlin official suggested that Russian businesses could help the government pay for the high-speed railways and toll roads on Putin’s ambitious new economic agenda. Rising oil prices are buoying the ruble, whose correlation with crude has tripled since the Bank of Russia stopped trying to separate them.

Anti-Kremlin activist Pyotr Verzilov, recovering in hospital in Berlin after almost two weeks unconscious, says he believes he was poisoned by Russia’s secret service, “possibly Russia’s GRU military intelligence”. Ruslan Boshirov, one of the men accused by the UK of poisoning former spy Sergei Skripal in Salisbury, has apparently been identified as a “highly decorated” military intelligence officer and Chechen war veteran. Anatoliy Chepiga was supposedly awarded the “Hero of Russia” honour in 2014; but Foreign Ministry spokeswoman Maria Zakharov dismissed the claims, saying there was no evidence to support them. Speaking at the UN General Assembly, Ukrainian President Petro Poroshenko called on other countries to help stop Russian aggression and expansion in his country. Foreign Minister Sergei Lavrov spoke out against US sanctions imposed on Venezuela this week, reaffirming “ongoing solidarity with Venezuela’s people”.

In an unusual move for a major Western oil company since the imposition of sanctions, Shell is in talks to buy a stake in a Gazprom Neft oil and gas project. Space junk is common in the isolated regions of northwestern Russia, providing building materials for boats and sleds.

PHOTO: United Russia party deputies attend a session during a vote for the pension reform bill at the State Duma, the lower house of parliament, in Moscow, Russia, September 26, 2018. (SERGEI KARPUKHIN/Reuters)