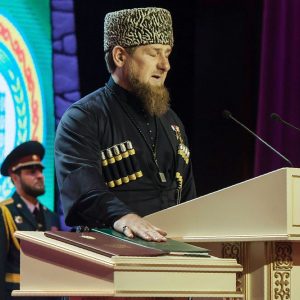 Ramzan Kadyrov, former war lord and controversial leader of Russia’s Chechnya republic, has made the unexpected announcement that he is ready to resign his position, leaving it for the Kremlin to choose his successor.   The statement, made in an interview with Rossiya 1, comes as Vladimir Putin is expected to announce he will run for his fourth term as president in elections due in March.  The news of an economic upturn will doubtless help Putin’s campaign, notes this article.  The ruling United Russia party is apparently resorting to brutal methods to wrest control of a local council in Moscow, where opposition politicians dominated in the last elections.  The Moscow Times comments on the phenomenon, saying the capital ‘has continued to be a hotbed of opposition during Putin’s tenure even as the federal government pours billions of dollars into urban improvement’.

The European Union has lambasted new legislation which will allow the Kremlin to label media outlets receiving funding from abroad as ‘foreign agents’ and impose sanctions against them, as an assault on the freedom of the press.  The US government agency, Broadcasting Board of Governors, which funds media like RFE/RL in Russia, has also criticised the move.  Criticism is not only coming from abroad however; former Finance Minister Alexei Kudrin, now the head of the Center for Strategic Research, has expressed his concerns about the NGO foreign agent law and its extension to the media.  Rumour has it that lawmakers would like to see fast food chain McDonalds incorporated into the foreign agent category.  The EU is widening its campaign to combat disinformation and fake news from Russia by allotting more than €1 million a year to its anti-propaganda unit, the East Stratum taskforce, which will receive money directly from the EU budget.  Is Europe also mulling lifting its sanctions regime against Russia?

Russia’s deputy foreign minister has noted that North Korea’s current pause in ‘provocations’ suggests that the denuclearization of the Korean peninsula may be underway.  Last month a Russian historian was deported from Poland for what authorities described as anti-Polish activities – now, in what seems to be a tit-for-tat move –  a Polish historian has met the same fate, one day after giving a lecture on the plight of Polish citizens during the Stalinist era.  The Moscow Times examines the effects of Putin’s decision to soften rules on domestic abuse.