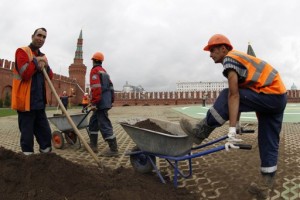 Social network VKontakte has been ordered by the federal communications watchdog to remove all references to children’s fashion from its group pages.  The government is considering increasing punishments for extremist crimes and ‘destructive activity by religious organisations’.  The Health Minister says that population decline has stopped, and that the birthrate actually rose by 5.6% last year.  French utilities provider GDF Suez agreed to buy a 9% stake in the Nabucco gas pipeline which aims to diversify energy supplies away from Russia, but according to a ‘dramatic shift’ in opinion, based on speculation that Nabucco could be overshadowed by the $39 billion South Stream pipeline plan, the project could be overshadowed by the more modest Trans Adriatic Pipeline through Greece.  The Bank of Moscow has filed a money-laundering case against its former head, Andrei Borodin, and may also sue him in a bid to reclaim money that was allegedly misappropriated during his employment.  The latest suggested anti-corruption measures include mandatory polygraph testing for state officials, and anti-corruption classes in educational institutions that train future state employees.

President Vladimir Putin is in Bishkek for an informal summit of the Collective Security Treaty Organisation, where he is expected to hold a number of bilateral meetings.  Over 1,500 people will participate in a founding congress of the All-Russia People’s Front next month.  This week’s SportAccord conference, gathering 1,200 world sports leaders in St. Petersburg, will ‘set the tone for the future of the Olympic movement’.  Following initial attempts to organise an international Syria peace conference, Foreign Minister Sergei Lavrov commented that it would be ‘a tall order’, with the date and participants still not set.  A failed bid for Egypt’s Orascom has thwarted billionaire Mikhail Fridman’s efforts to expand his telecoms empire.  A new Arctic research platform, which will give Russia ‘a year-round presence in the North Pole’, is expected to cost $223 million.

Masha Gessen tells a bewildering tale of attempting to join a gay rights rally in Russia.  A crane weighing several tons collapsed onto a block of flats in Kirov, as the Emergencies Ministry investigates claims that the crane had not been properly secured.

PHOTO: Labourers work near a new helicopter landing pad in the premises of the Kremlin in central Moscow May 27, 2013. REUTERS/Sergei Karpukhin