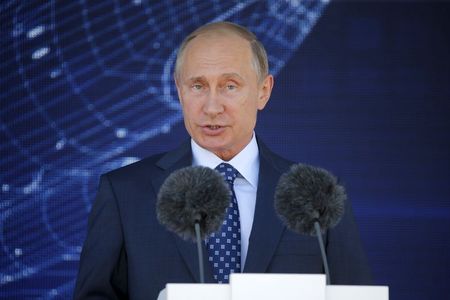 Roughly $113 billion worth of joint projects with China are being delayed due to Russia’s economic crisis.  The Central Bank is growing accustomed to the weakening ruble, says Bloomberg, possibly because it is helping it adjust to the low oil price; the currency was the world’s worst performer over the past 12 months, dropping 45%.  Sberbank bought $1 million worth of syndicated Russian oil loans from Western banks, apparently at a discount.  Finance Minister Anton Siluanov says Russia won’t take part in Ukraine’s debt restructuring (not that it has been approached to do so), and doesn’t agree with the writedown.  He also said that Russia plans to demand a full repayment of Ukraine’s $3 billion Eurobond, due in December, including interest.

Rosselkhoznadzor, the agricultural oversight agency, has burned 1.5 tons of food intended for a BMV racing team, claiming sanitary violations: ‘a very rational move because it looks so horrible’, comments the Washington Post.  The 26 year-old son of Prosecutor General Yury Chaika has links to the company that won a $642 million waste disposal contract in Moscow districts.  National Media, the company owned by long-term Putin ally Yury Kovalchuk (and chaired by gymnast Alina Kabaeva), has formed a new venture with Discovery Communications to distribute popular channels, in accordance with the new laws that limit foreign ownership of media.  A NATO training center opening in Georgia is ‘provocative’ to Russia, said a Foreign Ministry spokesperson.

Zhanna Nemtsova, the daughter of opposition politician Boris Nemtsov, has filed a complaint with the European Court of Human Rights, accusing the state of failing to protect his life; she says the investigation into his murder, six months later, has reached a ‘dead end’.  A former Duma deputy has been sentenced over the 1998 murder of fellow politician Galina Starovoitova.