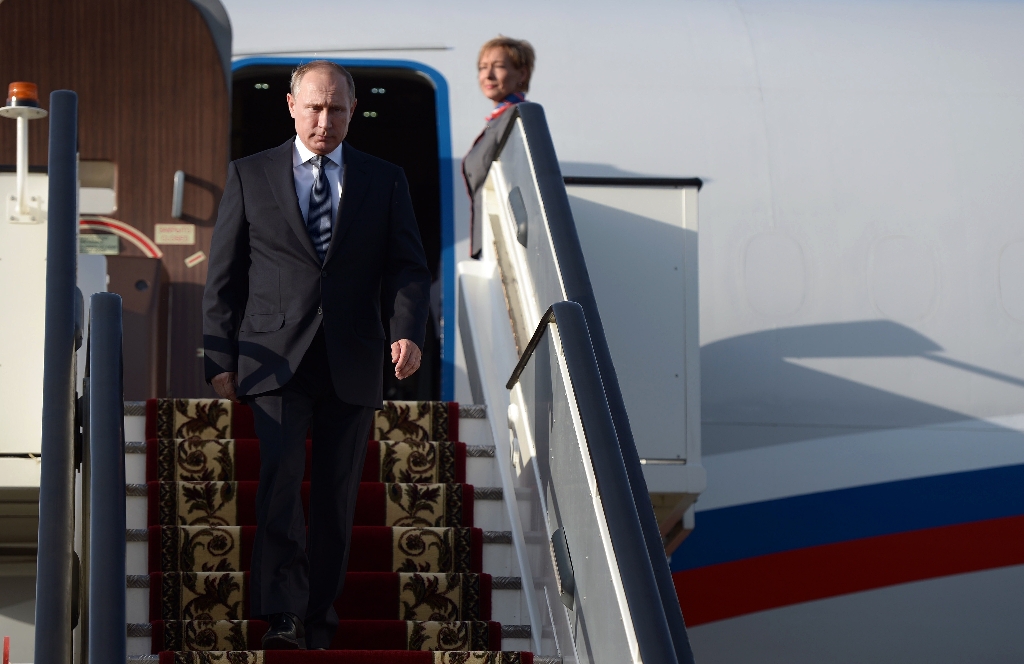 In advance of his address at the United Nations General Assembly in New York later today – his first at the U.N. in a decade, anticipated to focus mostly on Syria – President Vladimir Putin said that Russia has no plans – at least not ‘right now’ – to put combat troops in Syria, and criticised U.S. military support for Syrian rebels as illegal and counterproductive.  He also dismissed evidence of widespread atrocities by the Syrian state as ‘enemy propaganda’.  The Moscow Times says Putin’s focus on Syria is ‘a deliberate tactic to divert attention away from Ukraine’.  Putin is scheduled to meet with U.S. President Barack Obama after the address.  Anne Applebaum in the Washington Post predicts that Vladimir Putin’s incursion into Syria will develop as messily as the invasion of Ukraine has.  Putin says it is a shared ‘love for our Motherland’ that unites all Russians and, thereby, raises his popularity ratings.  He also described the breakup of the Soviet Union as a huge tragedy for Russia, ‘the largest divided nation of the world’.  Russia’s ambassador to Poland has stirred controversy by blaming Poland, in part, for World War II.  Iraq and Russia have signed an agreement to exchange intelligence as part of the fight against Isis.

Billionaire Alisher Usmanov and his business partner Ivan Tavrin have bought up controlling stakes in four television stations, at bargain prices, thanks to the new law restricting foreign media ownership.  Russia and Ukraine have reached an agreement on gas pricing – Ukraine will pay roughly $230 per thousand cubic meters, a discount of $17, and slightly more than Ukraine had hoped to pay.  Ukraine will ban flights by Russian airlines over its airspace next month.  Sergei Levchenko, a non-Kremlin candidate with the Communist party, was elected as governor of the Irkutsk region in Siberia – the first victory by an opposition candidate in a decade.  ‘Several hundred’ people gathered in St. Petersburg, and ‘several dozen’ in Moscow, for an antiwar demonstration on Saturday, with 12 detentions in all.

In the New Yorker, Masha Gessen responds to the sentencing of Gennady Kravtsov.  Portraits of Vladimir Putin and Prime Minister Dmitry Medvedev, hanging on the office wall of a regional governor arrested for fraud, were blurred out by a state television channel last week.  Quote of the day: ‘How can I be a gangster if I worked for the KGB?’ Putin asked.