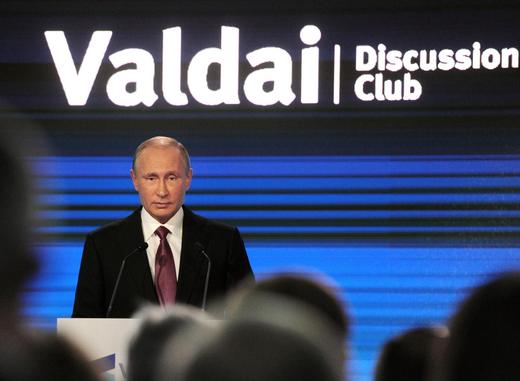 President Vladimir Putin is dominating headlines after his appearance at the Valdai International Discussion Club yesterday, where he unleashed what the FT called ‘a now-habitual stream of invective at US hegemony’, hinting that America is acting like a ‘banana republic’, rather than a great nation, by ‘hysterically’ suggesting that Russia could have any sway over its election results, even if it wanted to.  ‘I’d like to have the same kind of propaganda machine they’ve got in the West. But we don’t have anything as influential as CNN,’ he said. Putin then distanced himself from the man that some might think of as Russia’s version of a propaganda machine, Dmitry Kiselyov, by referring to Kiselyov’s comments about nuclear warfare as ‘harmful rhetoric, and not something I welcome’.  Russia has no intention of attacking anyone, he said, dismissing the notion as ‘unthinkable, silly and unrealistic’.  (Tell that to NATO, though.)  Many in the West see Russia’s interventions in Syria and Ukraine as ‘expressions of a broader Kremlin strategy. Regime survival and hostility towards the west are two sides of the same coin.’ But Putin continues to blame the US for the failure of Syria talks thus far, arguing that it does not stick to its agreements.

Activist Alexei Gaskarov has been released from prison after serving a 3.5 year sentence for taking part in the mass protest on Bolotnaya Square in May 2012; he maintains that ‘protests are a chance to influence our country’.  Actor Konstantin Raiki called on his artistic community to form a united front against government censorship.  Greenpeace Russia is alleging that the country cost itself an extra $68 million in damages (on top of an initial $11 million) by not allowing the organisation’s firefighters to help tackle the wildfires in Krasnodar in September, after the Emergency Situations Ministry said it didn’t need any volunteer help (with some allegedly attacked).  Former Defence Ministry official Andrei Belyayev has been sentenced to 12 years in prison for treason.

Rosneft is seeking to have an oil purchasing contract between Bashneft (which it just acquired a control stake in) and Lukoil canceled.  Initially touted as a possible option, Deputy Prime Minister Igor Shuvalov says Rosneft may now be forced to buy its own shares to boost government funds.