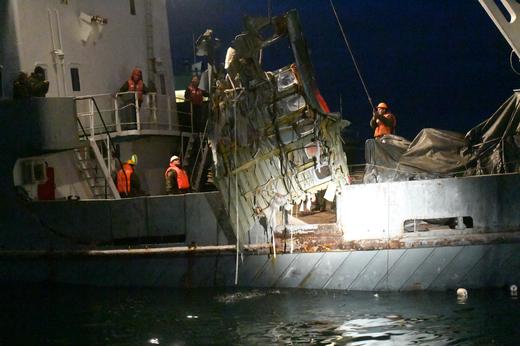 The Obama administration is apparently close to announcing a series of new sanctions and censures designed to punish Russia for interfering in this year’s presidential elections.  Foreign Ministry spokeswoman Maria Zakharova accused the U.S.’s new annual defence spending bill of being an attempt to undermine President-elect Donald Trump by forcing a ‘depraved’ anti-Russian policy on him.  According to the Foreign Ministry, the outgoing Secretary General of the U.N. praised Russia’s role in ensuring global peace and security during a telephone call with Foreign Minister Sergei Lavrov yesterday.  Russia wants to expand its air force deployment to Tajikistan.  The Foreign Ministry also says it is open to building relations with NATO to the degree that the alliance displays a readiness for equal partnership.  Russians are mourning the loss of dozens of members of the beloved Alexandrov Ensemble who were on board the military plane that crashed en route to Syria on the weekend.   President Vladimir Putin estimates that Russia loses 6% of GDP every year to environmental damage.

Russia has finally admitted to a state-backed campaign of doping that affected hundreds of athletes; the acting head of the Russian anti-doping agency called it ‘an institutional conspiracy’. Gazprom has filed proposals with the European Commission aimed at resolving the ongoing anti-trust charges levied at it in the E.U. for overcharging customers.  Forbes says the side effects of the low oil price for ordinary citizens include wage arrears and food costing up to 50% of income.  The New York Times also focuses on the increasing economic hardships for Russian citizens. ‘This is the unseemly flip side of the agile and unpredictable power that the world sees on television screens.’  Not surprising then that the end-of-year episode of The Weekly News, presented by Kremlin favourite Dmitry Kiselyov, focused on Russia’s accomplishments abroad and ignored domestic issues.

President Vladimir Putin sees the 1991 collapse of the Soviet Union as a disaster.  Activating a new pipeline carrying Russian gas to Crimea, Putin hailed ‘an important solution for the long-term development of Crimea’. A new, aggressive strain of the HIV virus has apparently broken out in Russia.  Vladimir Ovchinnikov, the Russian answer to graffiti artist Banksy, discusses his activism with RFE/RL.