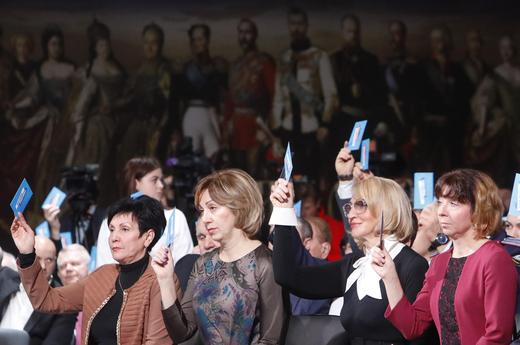 The Finance Ministry has disclosed Russian cabinet members’ 2016 salaries for the first time, revealing disproportionately high salaries for Finance Minister Anton Siluanov and former Minister of Economic Development Alexei Ulyukayev (who is currently in jail). President Vladimir Putin formally registered his re-election bid yesterday, allowing him to run in next year’s presidential elections as an independent candidate; his win will allow him to rule on until 2024. Political analyst Nikolai Petrov says Alexei Navalny’s call for a boycott of next year’s elections and a series of January rallies across Russia is likely part of a plan to garner a strong response from the Kremlin and thus increase his visibility. The Foreign Ministry accused the US of election meddling over its criticism of the Kremlin’s blocking of Navalny’s candidacy. The Moscow Times is predicting that the elections will be accompanied by the replacement of Prime Minister Dmitry Medvedev.

The Central Bank has yet to decide, but the Finance Ministry says it supports the idea to merge Otkritie, B&N and Promsvyazbank, the three troubled lenders bailed out this year. State conglomerate Rostec will supply four S-400 missile divisions to Turkey for $2.5 billion, with Russia providing loans to cover roughly half of the cost, despite the conflicting facts that the missile systems cannot be integrated into NATO’s military architecture, and that Turkey is a NATO member. The Russian Direct Investment Fund will provide a $696 million loan to Sistema to help it solve its dispute with Rosneft. Putin praised 2017 as an important and developmental year for Russia. He is hoping to reduce the shadow economy next year, which currently accounts for 39% of Russia’s GDP.

In the latest of a series of battles for the former Sports Minister since the exposure of Russia’s systematic doping regime, Vitaly Mutko has agreed to step down from the 2018 World Cup organising committee. The Anti-Terrorism Committee is investigating a blast in St Petersburg that injured at least 10 people yesterday. Putin was not exaggerating when he described the launch of Novatek’s $27 billion Yamal LNG project (on time and on budget, notes the FT) as an “extremely important step” for Russia; global demand has doubled over the last decade, and Russia is now likely to be able to take a 15-20% share in the market.

PHOTO: Members of the initiative group to nominate Vladimir Putin as a candidate in the 2018 presidential election attend a meeting in Moscow, Russia December 26, 2017. REUTERS/Sergei Karpukhin