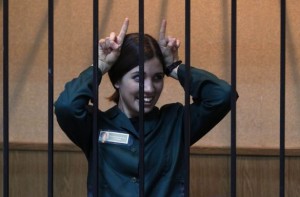 Roughly thirty protesters were detained in Moscow’s Red Square on Saturday for taking part in an unsanctioned gathering held in support of those detained in connection with last year’s Bolotnaya Square protest.  (Including a woman on crutches who was in her 70s.) Opposition activist Alexei Gaskarov is the latest to be detained by police in connection with the May 6 incident.  Prosecutor General Yury Chaika defended the recent inspection of Russia’s non-governmental organisations, saying that the government wants to ensure their compliance with the law, rather than to prevent them from carrying out their work.  Russia and Japan will hold high-level talks for the first time in a decade after Japanese Prime Minister Shinzo Abe arrived in Moscow yesterday, hopeful about constructing a peace deal that has thus far been prevented by a territorial row over the Kuril Islands.  A criminal case has been opened into possible fire safety violations at a psychiatric hospital in the Moscow region where 38 people were killed in last week’s blaze.  VTB will go ahead with its $3.3 billion share sale.

Four witnesses at the trial of Alexei Navalny said that they had not been pressured into dealing with a company co-headed by him.  Vladimir Pekhtin is threatening to sue Navalny over accusations regarding foreign assets.  Jailed Pussy Riot member Nadezhda Tolokonnikova’s plea for early release was rejected last week.  A Hermitage Capital employee reveals a menacing voicemail left at the company after it started investigating the fraud case uncovered by Sergei Magnitsky.  Ten U.K. companies are accused of laundering the money – part of a $230 million Russian tax fraud.  President Vladimir Putin says that the investigation of Magnitsky’s death reveals that ‘there was no ill intention, no criminal negligence’, calling it instead ‘a tragedy’.  Some of the Russians placed on the U.S.‘s Magnitsky List staged an ‘extravagant show of indifference’ on television over the weekend, mocking the ban and discussing how it will not impact their lives.  The wife of Potash billionaire Dmitry Rybolovlev alleges that he has created a network of offshore holding companies to conceal his assets.

Oil export duties may be phased out in favour of an increase in mineral extraction tax, according to Finance Minister Anton Siluanov.  Akhmed Bilalov, the former Olympic official who was fired in the wake of criticism from Vladimir Putin, claims he has been poisoned.  A new adoptions row is brewing, after children’s rights ombudsman Pavel Astahkov attacked U.S. authorities for taking a 5-month-old baby from his Russian parents.  Is Russia planning to implement a ban on adoption by foreign same-sex couples?  The F.B.I. is attempting to piece together Boston bombing suspect Tamerlan Tsarnaev’s last Dagestan trip.