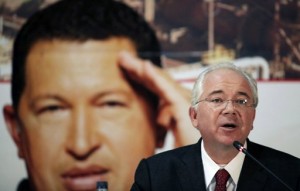 Ilya Kolmanovsky, a ninth-grade biology teacher from Moscow says he was fired from his job after attending a protest against new anti-gay legislation. He says he was able to have ‘a discussion’ with opponents of gay rights at the protest by showing them his wedding ring. ‘Amazingly, they just threw one egg at me.’  Kolmanovsky apparently regained his job after gaining national media attention.  Germany’s gay foreign minister says the new law to ban ‘homosexual propaganda’ is an infringement of human rights and could damage Russia’s relations with Europe.  Venice is seeking to halt cultural relations with St. Petersburg because of its anti-gay legislation.  U.S. Secretary of State Hillary Clinton has called on Europe to support U.S. efforts to make Russia more open and integrated with the West, as relations deteriorate with the news of Russia announcing that it will scrap its agreement with Washington to cooperate on law enforcement and narcotics control.

Rosneft chief Igor Sechin, speaking in Caracas, said Russia and Venezuela would expand their energy ties, with officials signing plans for offshore gas and oil projects, and the creation of a new company.  Gazprom is currently estimating the cost of the South Stream pipeline at $16.9 billion.  The Investigative Committee wants lawmaker Vadim Bulavinov’s immunity from prosecution lifted, as part of an investigation into financial mismanagement in Nizhny Novgorod, where he was formerly the mayor.  The leader of Cyprus’ Orthodox Church has turned to Russia in hopes of financial assistance. Bloomberg quotes a money-laundering watchdog as saying, ‘Cyprus has functioned as a Laundromat for Russia for years. It would be poetic justice if the EU required Russia to throw in some of the stabilization funds.’  Is Russia a ‘faux dictatorship’ for failing to enforce many of its new regulations?

Regional Development Minister Igor Slyunyayev plans to reform his ministry from its current state in which it is ‘responsible for everything’ but has no ‘legal authority’.