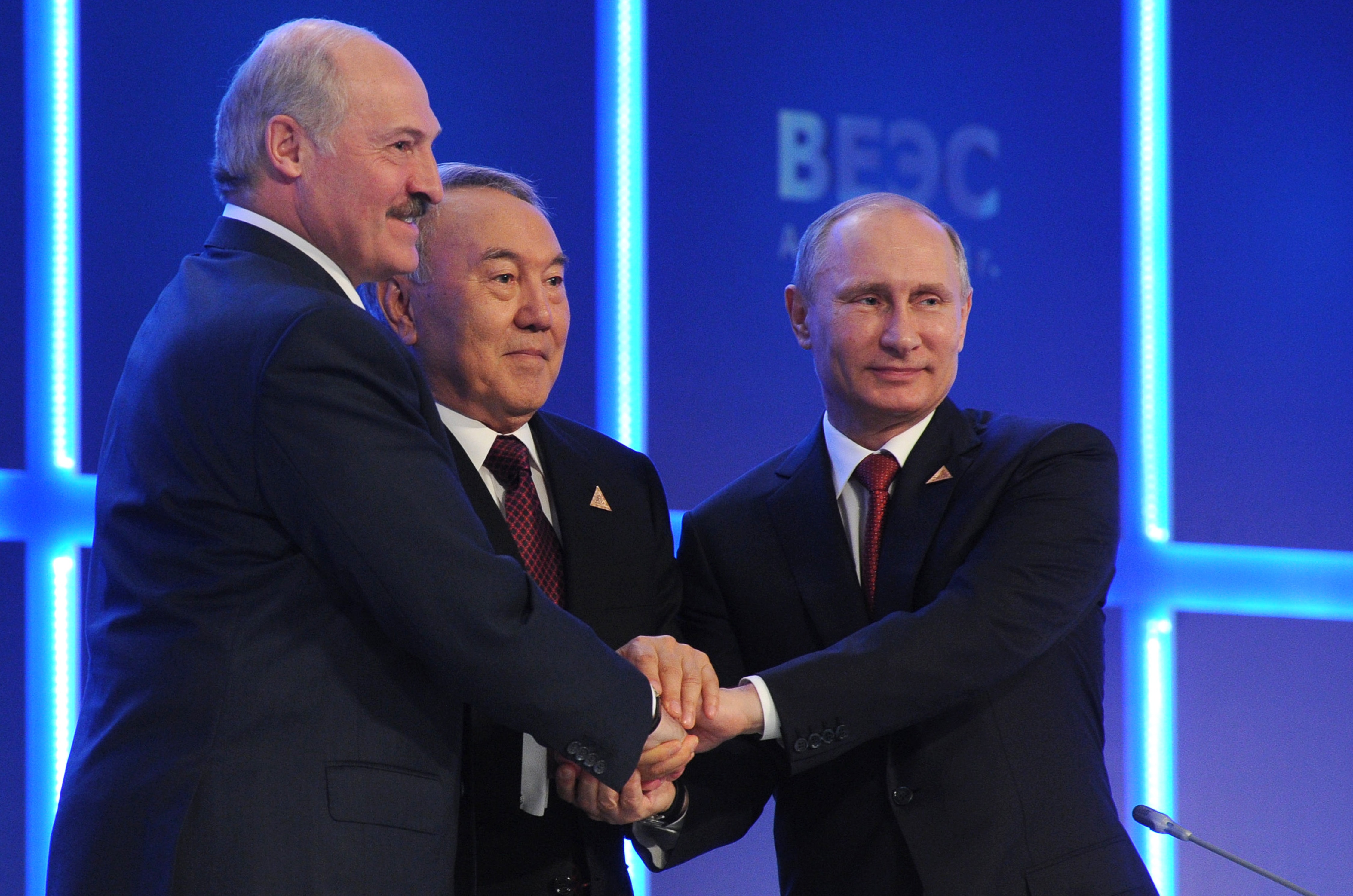 President Vladimir Putin signed an agreement with his Kazakh and Belarusian counterparts yesterday to create the long awaited Eurasian Economic Union that, in Putin’s words, ‘unites more than 170 million people’.  Belarusian President Alexander Lukashenko noted that the alliance ‘lost someone along the way, I mean Ukraine’; Kazakh President Bakytzhan Sagintayev praised the union as unpolitical: ‘It is a pragmatic means to get benefits. We don’t meddle into what Russia is doing politically.’ The ‘epoch-making’ alliance, as Putin called it, will come into force on January 1, with critics arguing that the alliance will be a ‘pale imitation of what the members first envisioned.’  The absence of Ukraine from the group ‘undermine[s Putin’s] dream of restoring Soviet glory days,’ says Reuters; Kyrgyzstan is already being courted as the next to join.  The agreement was promptly followed by various new oil deals.  Russia, Ukraine, and the European Union are holding talks today in an attempt to resolve the current gas dispute.  14 people were killed in Slavyansk yesterday after pro-Russian rebels shot down a Ukrainian military helicopter.  Ukrainian President Petro Poroshenko responded by vowing to punish those responsible.  Putin did not receive an invitation to Poroshenko’s inauguration ceremony, according to his spokesperson.

After reporting an 18% fall in first-quarter profits, which it blamed on the Ukraine crisis, Sberbank expressed hope that ‘the worst is over’, and says it may consider a government plan to boost banking capital and lending.  Financier George Soros suggests that the West offer free political risk insurance to investors in Ukraine’s economy.  The former chairman of Morgan Stanley, John Mack, is leaving his seat on the board of Rosneft for ‘personal reasons’.  Pollsters are keen to check Putin’s approval ratings these days, with the second round of results this month published by the Levada Centre estimating this month’s pro-Putin ratings at 83%.  A separate poll by VTsIOM says almost half of Russians want the country to regain the superpower status it lost with the collapse of the Soviet Union.  Russia is planning to criminalise the failure to declare any dual citizenship with a $5,800 fine.  The Federal Antimonopoly Service says Russia’s duty-free market is monopolised and impervious to competition.  Syria is introducing mandatory Russian-language classes for its schoolchildren.

Presidential adviser Sergei Glazyev made some outlandish comments to the press about the United States ‘unfurling a war in Ukraine, after organising a coup’.  Foreign Minister Sergei Lavrov says U.S. President Barack Obama’s boasts that Western sanctions have isolated Russia are ‘unrealistic’, citing as proof the success of the St Petersburg International Economic Forum.  U.S. officials are reporting that Russia has pulled back tens of thousands of troops from along its border with Ukraine.  Russia has suspended U.S. pig imports, citing virus concerns.