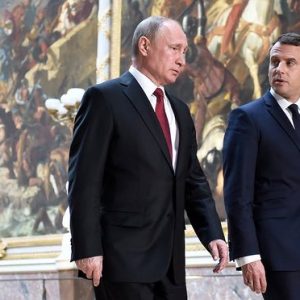 According to new French President Emmanuel Macron, he held an ‘extremely frank and direct’ conversation with Vladimir Putin yesterday at the Palais de Versailles.  During the meeting the two men discussed the use of chemical weapons in Syria, which the new President described as a representing a ‘very clear red line‘.  The duo apparently steered clear of discussing the Kremlin’s alleged preference for Macron’s rival, Marine Le Pen, and accusations that Russia had interfered in the elections that ultimately bought Macron to power.  At the press conference, however, the French President did criticise Russian media influence, saying of RT and Sputnik, ‘when media organs spread slanderous falsehoods, they are no longer journalists’.  Russia’s ambassador to France, Alexandre Orlov, has rebuffed allegations of Russian hacking in an interview and insisted that Le Pen was never Russia’s preferred choice.  Bloomberg’s Leonid Bershidsky has this advice for countries trying to make sense of Putin’s regime: ‘Cooperate with Russia where it’s acting fundamentally like a Western country and confront it where it isn’t.’  The Kremlin has condemned the latest missile launches conducted by North Korea, urging restraint.  The Foreign Ministry has promised a ‘tough’ response to the expulsion of five members of Russia’s embassy in Moldova.

Billionaire Alisher Usmanov has upped the ante in his video war with corruption investigator Aleksei Navalny, by creating an online competition for ‘the best stickers, caricatures, parodies, videos, and memes’ about their battle.  Meanwhile Navalny and his allies have formally requested permission from the authorities to hold anticorruption rallies in Moscow and several other cities on June 12.  A new video for an anti-protest song by singer Alisa Vox has been dismissed by Internet users as crude Kremlin propaganda, reaching up to a quarter of a million dislikes.

A Danish national has been arrested in the city of Oryol after attending a meeting of the Jehovah’s Witnesses, which has been dubbed an extremist organisation.  Prosecutors hope for a five-year suspended sentence for the former head of Moscow’s Ukrainian Literature Library, who has been charged with extremism and embezzlement in a case that rights activists say is politically motivated.  RFE/RL looks at tensions between separatists and Ukrainian coastguards in the Sea of Azov.  The offices of Russian tech company Yandex have been searched by the Ukrainian security services in the cities Kiev and Odessa, with no apparent explanation.

PHOTO: Russian president and French President Emmanuel Macron at their first meeting in the Palace of Versailles, May 29, 2o17. (Stephane De Sakutin/EPA)