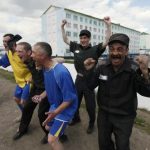 Russia maintains that it is ‘categorically against any intervention in the Syrian conflict’, and will block U.N. support for foreign military intervention in Syria, despite the deaths of 108 people in Houla over the weekend.  A spokesperson for President Vladimir Putin says that any pressure on Russia to change its mind would be inappropriate, and that intervention at this point would be ‘premature’.  The Moscow Duma is moving towards approving the return of direct mayoral elections, but not ‘in the way that voters would like to see them’: restrictions will make it difficult for opposition candidates to register.  Former Europe minister Denis MacShane says that Putin is planning to snub the London Olympics because he ‘realises that he is not welcome’.  An opposition activist has been charged with ‘breaching public order’ and jailed for 15 days for spitting on a portrait of Putin.  Moscow authorities will not allow an opposition protest to go ahead as proposed on June 12, suggesting a different route which opposition leaders have already ruled out.  Newly proposed laws would ban Russians from wearing masks at protests.

The All-Russia People’s Front will remain independent from United Russia.  Moscow is not impressed by U.S. Ambassador Michael McFaul’s ‘blunt’ statements and ‘impertinent remarks’ about U.S.-Russia relations.  A visa agreement with the U.S. has been finalised and will be sent to the State Duma, which may or may not give it a hearing.  ‘After more than a decade in power, Russia’s leaders are no longer capable of pursuing better policies,’ says Nina Khrushcheva.  ‘The high concentration of capital in the hands of oligarchs and bureaucratic elite remains a distinguishing feature of Russia’s still-chaotic form of capitalism that dooms it to pathological inefficiency,’ says Boris Kagarlitsky.

Poachers of the Barents Sea Crab are damaging the market for local fishermen.  Russia’s regions are ‘impossible to navigate for those who don’t speak Russian’.

PHOTO: Inmates cheer for their teams during a soccer match at a strict-security camp near the village of Startsevo, north of Russia’s Siberian city of Krasnoyarsk May 30, 2012. The match was dedicated to the upcoming Euro 2012 soccer championships, camp officials said. REUTERS/Ilya Naymushin