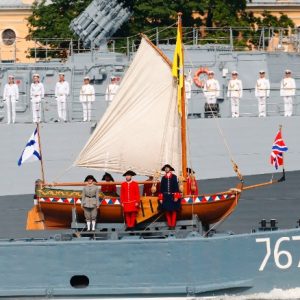 In response to the news that the US Senate has decided to approve another year of sanctions, Russia has ordered that the United States reduce its diplomatic and technical staff at its embassy in Moscow and consular institutions in other Russian cities from the current number of 1200 to 455. Moscow has also seized a dacha compound and warehouse used by US officials. President Putin says that, for the moment, these are the only retaliatory steps he will take. And, says Vladimir Frolov, in the Moscow Times, ‘the expulsions are the least painful way that both countries can register their displeasure with each other, without actually inflicting bodily harm’ as they can be reversed and do not effect ‘core national interests’. The US State Department has, nonetheless, called the move ‘regrettable and uncalled for’. Russian stocks fell the most in six weeks following on from the news, though some investors are sanguine about using this as a buying opportunity. The German Minister for Economic Affairs and Energy, Brigitte Zypries, is concerned by the new US bill on sanctions, (which she has called ‘a violation of international law’) because she believes it will impact upon European countries cooperating with Russia in the energy sphere.

The Kremlin is reportedly mulling retaliatory steps against those who disrupted Deputy Prime Minister Dmitry Rogozin’s visit to Moldova by preventing the plane he was travelling on from entering Romanian airspace. RFE/RL offers a podcast examining the potential for Russian meddling in the upcoming presidential elections in Kyrgyzstan, due to take place on October 15. One of the correspondents for state-funded international network RT has reportedly been killed in shelling by Islamic State forces in the Homs province of Syria. This article wonders, when public services in Russia have been universally hit by the economic downturn, why is it that when it comes to Chechnya, the Kremlin does not economize?

Central Bank governor Elvira Nabiullina has an unusual problem: rotting potatoes. After a brief reprieve, Internet proxy services (including virtual private networks) have finally been banned by President Putin, on the basis that they assist the propagation of extremist materials. A new photo series by Lilia Li-Mi-Yan stages the issue of economic disparity (of which Russia is the global leader) through images of the Russian elite at home with their staff.

PHOTO: Russian sailors stand in attention on a military vessel carrying a replica of a boat of Peter The Great during a naval parade in St. Petersburg, on Naval Day, July 30, 2017. (CNN)