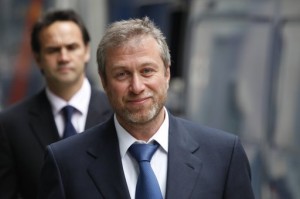 According to investigators, the man who confessed to killing two women in a central Russian city says he scrawled a message in blood at the murder scene that read ‘FREE PUSSY RIOT’ (image) because he wanted to mislead investigators.  Brian Whitmore notes the speed with which the pro-Kremlin media used the case to further tarnish the group’s image.  Police in Russia’s Voronezh region are being taken off the roads late at night in order to curb accidents caused by officers.  State Duma Deputy Gennady Gudkov has opened the doors to one of his companies in a bid to refute allegations of improper conduct.  The Guardian has compiled a Q&A relating to the Boris Berezovsky / Roman Abramovich court case.  A verdict is expected this afternoon on whether or not Abramovich will have to pay his former partner $6 billion.

The shale gas boom in the U.S. has prompted the Energy Ministry to adjust its strategy for the next two decades. Oleg Deripaska writes about Russia’s need to maximise its energy infrastructure potential.  On Russia’s energy and social strategies in the Arctic.  Norway’s Statoil has signed an Arctic exploration deal with Rosneft to drill six ‘wildcat wells’.  France’s Total oil company has underlined that the Shtokman project has been suspended, but only temporarily.  Morgan Stanley’s Russia office is to lose its chairman and president.

The opposition have applied to hold another ‘March of Millions’ in Moscow on September 15, anticipating 50,000 participants.  Moscow’s historic Metropol Hotel has been sold for $275 million.  Russia will censor The Simpsons cartoon series to comply with a new law banning scenes of violence, drinking, and smoking.

PHOTO: Russian businessmen Roman Abramovich and Boris Berezovsky rose to riches together in the chaotic years of post-Soviet Russia and then became archenemies and a British judge will soon rule on which oligarch will defeat the other in a multi-billion-dollar court battle. After a seven-month delay, Judge Elizabeth Gloster is expect to deliver a summary ruling Friday Aug. 31, 2012 to settle the legal feud between Roman Abramovich, the billionaire Chelsea Football Club owner, and self-exiled tycoon Boris Berezovsky. (AP Photo/Lefteris Pitarakis, File)