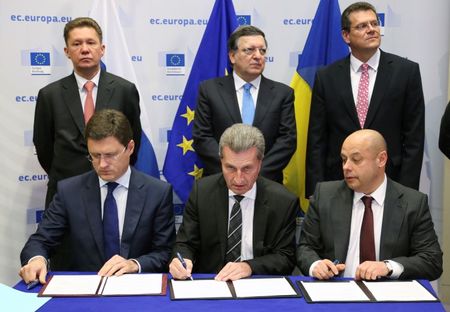 Ukraine and Russia have reached an ‘11th-hour’ agreement on gas supplies for the winter, easing fears about energy security during the cold months.  Moscow will resume supplies in exchange for Ukraine immediately paying off $1.45 billion of its gas debt, and promising to cover the remaining $3.1 billion by the end of the year, according to EU Energy Commissioner Guenther Oettinger, who signed the accord, along with Russian Energy Minister Alexander Novak and his Ukrainian counterpart Yuri Prodan.  Uncertainty still remains regarding next summer’s prices.  Moscow’s Arbitration Court has ruled that the Bashneft stake owned by Sistema was illegally privatised and now must be returned to the state – effectively nationalising the company. The decision has led to ‘an outcry in Russia’s business community’ and drawn comparisons with the break-up of Yukos.  Sistema says it will appeal the decision.  Russia plans to claim over one million square kilometers of the Arctic shelf by filing a formal application with the United Nations next year.  Some of Poland’s big industrial consumers of natural gas are reducing their intake from PGNiG, which gets most of its imported gas from Gazprom, and diversifying to other sources.

U.K. newspapers are responding to the news that Russia Today will begin broadcasting on British television with horror (the Times calls its reports ‘outlandish and deranged assumptions’ and cited a former employee’s claim that the station ‘is not about the truth’), wry disbelief (the Independent mentions some of RT’s more embellished stories), and sarcasm (the Guardian selects some ‘memorable moments’ including a clip of ‘compelling political pundit […] Steven Seagal’).    Homophobic Duma member Vitaly Milonov called for Apple CEO Tim Cook to be banned from Russia following Cook’s public comments about his sexuality.

The head of the company that built the Vostochny Cosmodrome has been charged with embezzling $43 million from the project.  Alexei Navalny has revealed that the head of Russia’s state-owned Pension Fund ‘owns property he cannot legally afford on his salary’.  Prime Minister Dmitry Medvedev approved the establishment of a free economic zone in Crimea, a bid to attract investors to the region.  A row is brewing with France over its likely failure to deliver the Mistral helicopter to Russia carrier on time this month.  The Bank of Russia has lost nearly $21 million since the onset of Western-led sanctions.