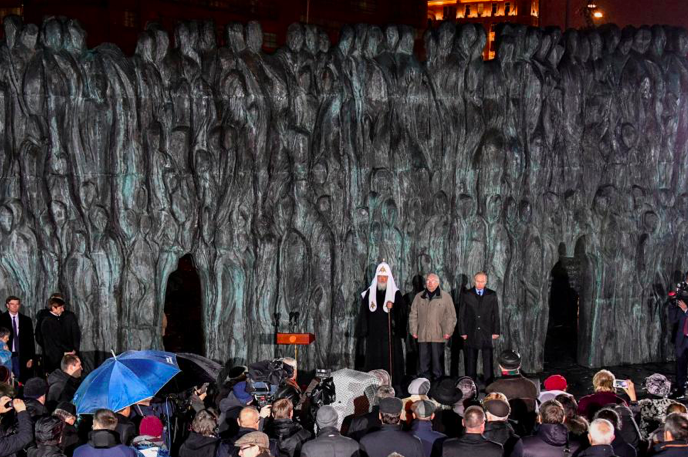 President Vladimir Putin attended a meeting of the presidential Human Rights Council, where he said that the basis of the case against director Kirill Serebrennikov is “purely financial”, that the attack on Tatyana Felgengauer was nothing to do with freedom of speech, and that there is no “atmosphere of hatred” in Russia (the Moscow Times reviews Serebrennikov’s Little Tragedies). Putin then attended the unveiling of “The Wall of Grief”, a memorial dedicated to victims of Stalin’s Soviet-era repression (the BBC has the history) in which he urged calm, rather than vengefulness, in the wake of remembering “the tragedy of repressions and their causes”. A clear and definite assessment of such repressions, he said, is what will “help prevent them in the future”. “Critics accused the government of hypocrisy given the continued lack of political rights,” said the NYT. Putin then said that there is a possibility that the law on mass public gatherings could be amended, but that he understands why “the authorities” try to push gatherings to the city limits, blaming protesters who “aggravate the situation deliberately to attract attention”. The Presidential Council for Human Rights would support the development of a national plan for human rights legislation. The European Court of Human Rights has accepted the Levada Center’s lawsuit against the Kremlin’s call for it to register as a “foreign agent”. But the foreign agents law has successfully discouraged blacklisted NGOs from taking foreign funding, Putin says.

Journalist Tatyana Felgengauer, who was stabbed in the neck at work last week, has thanked her supporters in a Moscow Times op-ed. “[W]hen you are a fighter and when there are people ready to fight for you, then the story has a happy ending.” Russian state media and Ekho Moskvy radio station are continuing their war of words following the attack. Dmitry Kiselyov accused the station of fomenting an “atmosphere of hate” (the very one that Putin denied?), and called Felgengauer’s attacker “a typical representative of the Ekho Moskvy fan club”. Paul Mason describes the Russian Revolution as “an intervention by the masses into history, like the French before it, and it is possible to celebrate that if you also acknowledge and celebrate the fight workers put up against the fairly rapid shutdown of their freedoms that happened in the years afterwards”. The lawsuit filed by two journalists against the FSB over its demands that messaging app Telegram turn over encryption keys to the government, has been rejected.

Journalist and TV host Yekaterina Gordon has announced her plans to run in next year’s presidential elections, saying that her main campaign focus will be single mothers’ rights (and drawing a totally neutral response from the Kremlin). Political consultant Alexei Sitnikov says “Let’s be honest, we all know that Putin will win this election,” but that candidates like Ksenia Sobchak are entering the presidential campaign “to get ready for next time […] to show those in power that there are many of us”. Russia and Nigeria have signed agreements on the building and operation of a nuclear power plant in the latter’s territory. Russian-backed content reached as many as 126 million Americans on Facebook during the US presidential elections, the company revealed.